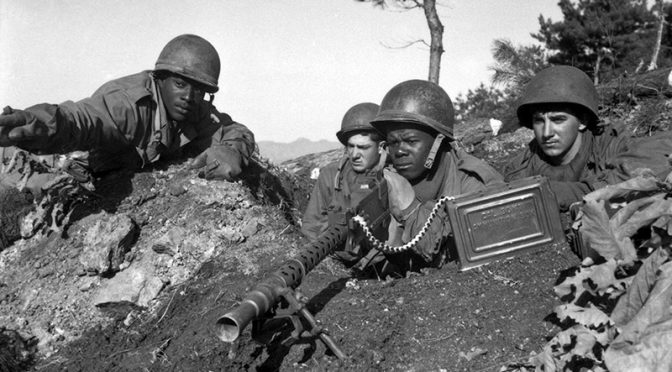 Seventy years ago today, on 25 June 1950, the Korean People’s Army crossed the 38th Parallel and advanced into South Korea with infantry, tanks and artillery, and the support of China and Soviet Russia.

Within five days they had hurled the ill-equipped South Korean army back, decimating a 95,000 strong force to 20,000. The UN Security Council called on its members to send forces to the aid of South Korea. The US acted immediately, initially deploying a division from Japan by early July. Throughout the three-year conflict, the US accounted for 90 per cent of the UN force.

British Commonwealth forces were among those that followed them into Korea, with Australian troops from Japan leading the way. The Australian, British, Canadian, New Zealand, and Indian troops made up what became the 1st Commonwealth Division. In all, 90,000 British troops had fought in Korea by the time the war ended in 1953.

With both sides fought to a standstill, the result was stalemate, and remains to this day a frozen war. Often thought of as ‘The Forgotten War’, few, either in Britain or the US know much about it beyond the TV comedy series M*A*S*H.

Yet Korea saw some of the bloodiest fighting in any conflict before or since, with a death toll of 300,000 UN and South Korean troops, up to 735,000 North Korean and Chinese troops, and an estimated 2—3 million civilians from both sides.

By September 1950 UN forces had been thrown back into an enclave of south-east Korea around Pusan, covering just 10 per cent of the country, with the South Korean capital, Seoul, in enemy hands. On 15 September US General Douglas MacArthur, the UN commander, launched an amphibious attack at Inchon. It was one ofthe most brilliant and decisive battles in all military history and led to a strategic reversal for North Korean forces.

By the beginning of October, South Korean forces pursued the Korean People’s Army back across the 38th Parallel, followed by UN forces, who captured the North Korean capital of Pyongyang on 19 October. With the KPA routed, UN forces advanced towards the Chinese border. As General MacArthur contemplated crossing into China, 300,000 Chinese forces infiltrated into North Korea, attacking UN troops close to the border on 25 October.

Thus began the most significant conflict outside its borders yet fought by the People’s Republic of China, founded only the year before the war began. As the West enters a new phase in our relations with China in the wake of Coronavirus, what lessons can we learn from Korea?

The most obvious is intelligence. A failure of intelligence enabled the surprise attack by North Korea into the south, despite the lengthy consideration given to this move by North Korean leader Kim Il-sung and his consultation with both the Soviet Union and China, who encouraged his move. Nor did intelligence warn of the large-scale Chinese offensive into North Korea in October 1950. In common with many other wars and military campaigns it is possible intelligence combined with decisive US action could have averted the Korean catastrophe.

By its very nature intelligence has a greater record of failure than success, but it remains as important today as it ever has been and demands increasing investment, sophistication and boldness. That word boldness is important, because today we are too often witnessing the opposite, with Western intelligence and covert forces frequently hamstrung by counterproductive legislation when trying to confront foes, especially China, with no such constraints.

A second failure was deterrence. As British force reductions leading up to the Argentinian invasion of the Falklands in 1982 were among the factors that emboldened the Argentinians to invade, and President Obama’s withdrawal of US forces from Iraq in 2012 led to the creation of the Islamic State, US withdrawal of occupation forces from South Korea in summer 1949 had a similar effect.

Stalin, whose go-ahead was necessary for Kim to attack, also believed that US failure to intervene to prevent communist victory in China indicated they would be unlikely to defend South Korea, which was of far less strategic significance. A similar signal was sent by President Truman’s January 1950 statement that the US would not interfere with communist China’s designs against Taiwan (then more commonly known as Formosa).

China’s warnings against UN forces crossing the 38th Parallel were ignored. The US failed to recognise the importance China placed then — and continues to place today — on the North Korean buffer at their border, assessing that Mao was bluffing. That is not to argue that UN and South Korean forces should not have entered the North, but that they should have done so with their eyes open as to the likely consequences.

That lesson does not just apply to Korea today. China’s profound global expansion in the 21st Century means they see many other territories, not just the South China Sea, but globally, as their buffer, their vital national interests.

Just as Mao Tse Tung wanted control in Korea in 1950, today Xi Jinping intends to fully control not only Hong Kong and Tibet but also Taiwan. Just as Mao needed the Korean War in 1950, Xi’s planned reforms at home and the instability they are likely to precipitate, as well as his desire to foster Chinese nationalist spirit, will require counterbalance. That will come in the form of confrontation with the US and growing international prestige, influence and expansion.

Much has changed in the last 70 years, and Xi’s preference will be to achieve these through non-kinetic means. But the actions in Korea of Mao, whom he greatly admires and intends to equal or surpass, should provide a warning for the future.

Image: Soldiers of the US 2nd Infantry Division in action in Korea  (US Army photo).