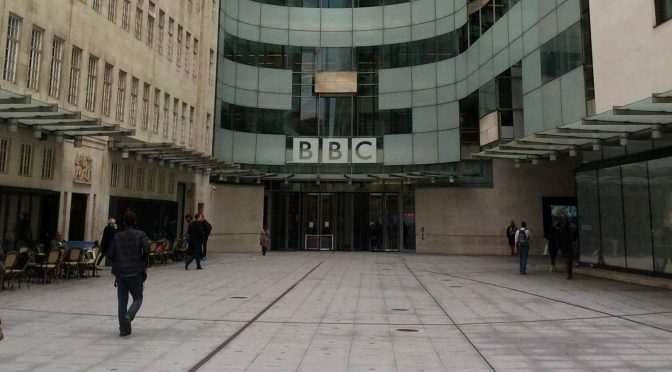 More than any other media organization, the BBC is responsible for inciting hatred against Israel — not just in Britain but globally. Its agenda helps to ensure continued aggression against the Jewish State; fuels violence by Hamas and other terrorist groups; feeds the boycott, divestment and sanctions movement; encourages distorted condemnation of Israel by human rights groups and international bodies; and provides material to be exploited by activist university professors and students.

All of this not only seriously harms the reputation of the State of Israel and stimulates antisemitism around the world, it also worsens the suffering of Palestinians by uncritical coverage of the leadership that is responsible for their plight.

Plenty of other media organizations and propagandists contribute to this malevolent narrative, but the BBC is more influential than any of them because of its widely perceived objectivity, respectability and reliability, combined with unrivalled reach. It operates under a contract with the British government and is bound by a Royal charter, together requiring accurate and impartial news and analysis of current events and ideas. In its own words: ‘BBC News is respected both in the UK and around the world for the strength of its journalism and impartiality.’

It is the largest broadcaster on the planet, with over 35,000 staff. Last year it boasted that on average 438 million people around the world came to the BBC each week.

Following accusations of slanted reporting of the second Palestinian intifada, which began in 2000, and the rise in Jew-hatred caused by it, in 2004 the BBC was pressured to open an inquiry into its coverage, by Malcolm Balen, a former BBC News editor. For 17 years Balen’s findings have been kept under lock and key by the BBC, which admitted to spending £330,000 of public funds in a series of legal battles to prevent its release. Efforts are now being made by filmmaker Hugh Kitson and others to have the report made public. In parliament this June, Conservative peer Lord Polack urged the government to compel the BBC to release it. ‘What is it they are hiding and what are they afraid of?’, he asked. Responding, the Minister for Digital, Culture, Media and Sport said that ‘in some instances it [the BBC] has fallen far short’ of the required standards.

In the wake of the Balen report, in 2005 the BBC created a Middle East Editor to add context to coverage of events on the ground. Experienced reporter Jeremy Bowen was given the assignment and has been in the job ever since. Bowen had been BBC Middle East Correspondent from 1995-2000. In May 2000, while covering the IDF withdrawal from Lebanon, his driver was killed by IDF tank fire, an event he described as the pivotal moment in his life.

An IDF investigation concluded this had been a tragic mistake. Bowen however seems to have no doubt the IDF intentionally attacked him, a BBC journalist. In a tweet last year, on the anniversary of the incident, he wrote: ‘They were close enough to see us clearly with the sophisticated optics in a Merkava tank.’

I have fought in a comparable British tank and know that, no matter how sophisticated the optics, mistakes often happen in the innate confusion of war. A Challenger tank in my brigade during the 1991 Gulf war opened fire on a British Warrior armoured vehicle and in the 2003 Gulf war one British tank attacked another, killing two crewmen.

There have been many other similar incidents involving tanks. Would Bowen argue that these were also deliberate? In 2003, BBC journalist John Simpson was wounded in a US ‘friendly fire’ air strike that killed his interpreter and 17 others. He did not suggest this was a deliberate action by the Americans, but concluded: ‘these things happen in a war’.

Whatever the reality, no-one could blame Bowen for feeling the way he does about the May 2000 incident, and some might find it hard to retain their objectivity. But the wisdom of appointing a man with this experience to a role intended to address accusations of biased reporting must be questioned.

Three allegations that Bowen breached BBC guidelines on accuracy and impartiality were fully or partially upheld in 2009 by the BBC’s Editorial Standards Committee, which also said that he had failed to acknowledge there were views contrary to his own. Bowen rejected this censure, branding complainants ‘the enemies of impartiality’.

The BBC’s reporting on the Gaza conflict this year typifies its long-term bias against Israel. It constantly drew moral equivalence between Israel, a Western liberal democracy, and Hamas and Palestinian Islamic Jihad, both proscribed terrorist organizations, whose status I never saw mentioned in BBC reports. There was no acknowledgement that the conflict had been initiated by these groups that openly seek the destruction of Israel or that without their violent actions, no Palestinians in Gaza or civilians in Israel would have died. Instead the BBC maintained the fiction — pushed by the Palestinian side — that Israel’s actions in Jerusalem were the cause. Nor did they mention that Hamas misappropriated millions of dollars of international aid to construct tunnels, rockets and other engines of war to attack Israeli civilians.

This biased journalism was crowned by commentary direct from Jeremy Bowen, whose report from Gaza at the end of the conflict looked more like pro-Hamas propaganda than objective reporting. This was true to form. In an article written by Bowen after the last major conflagration in Gaza in 2014, he said: ‘I saw no evidence … of Israel’s accusation that Hamas uses Palestinians as human shields’. This despite universally recognised evidence that human shields are Hamas’s consistent tactic against Israel, as proudly admitted on more than one occasion by Hamas leader Fathi Hamad and confirmed again in May in a speech to the UN Security Council by Special Coordinator for the Middle East Peace Process Tor Wennesland.

Why so much emphasis on Bowen’s role? Because all BBC reporting on the Israel-Palestinian conflict for more than 15 years has been driven, above all, by his editorial influence. According to British newspaper The Independent: ‘As Middle East editor of the BBC, he holds a position of such importance that people from all over the world look to him for an understanding of the course of international affairs.’

Bowen says of his role: ‘to try to explain the most complex and newsworthy place in the world is a hell of a big job, really.’

I do not blame Bowen for the influence he wields, I blame the BBC executives that allow him, with his history, to hold a position that dominates the coverage of the world’s largest broadcast media corporation. But of course he fits well into an organization infected with such a blatantly biased agenda on Israel. During the 2021 Gaza conflict, according to the UK’s Jewish Chronicle, following complaints the BBC had to issue corrections eight times in their Arabic news coverage alone.

Over the years, many BBC staff have betrayed their own bias both in their reports and on social media. For example, this year the BBC was forced to fire journalist Tala Halawa after a tweet she had written before being hired by the BBC was brought to their attention by media watchdog Honest Reporting. She wrote: ‘Israel is more Nazi than Hitler! Oh, Hitler was right, IDF go to hell’.

Senior BBC producer Alaa Daraghme recently shared a video on Twitter which he wrote was ‘An Israeli settler ramming a Palestinian man near the Lions Gate.’ In fact the video showed a car being driven onto the sidewalk after an attempt by Palestinians to lynch the driver, who then lost control. There are many other such cases of bias and distortion among BBC staff.

In May, during the Gaza conflict, the UK charity Campaign Against Antisemitism (CAA) called on the BBC to dismiss Bowen following a tweet he posted on his official BBC twitter feed instructing ‘every Jew’ to read an ‘exploration of Judaism’ that claimed that ‘Racism, hate and violence are Jewish values too’. Gideon Falter, CAA Chief Executive, commented:

‘As antisemitic incidents against Jews in Britain surge, Mr Bowen has chosen this moment to order all Jews to read an article that most people will have taken to be an analysis of why Judaism is a religion of racism, hate and violence. He will have known the feelings towards Jews that this would incite and recklessly added fuel to the fire.’

Last year, CAA complained to the BBC about a report marking the 75th anniversary of the liberation of Auschwitz by Orla Guerin, veteran BBC international correspondent. She was accused of linking the murder of six million Jews during the Holocaust to Israel’s treatment of Palestinians, a comparison that is antisemitic under the IHRA Working Definition of Antisemitism, adopted by the British Government. Following her report, historian Simon Sebag Montefiore wrote:

‘This BBC News commentary on Yad Vashem by Orla Guerin linking the Holocaust to Israel’s West Bank occupation is truly foul — managing to be both shamefully amoral and historically inaccurate, utterly cynical and complacently selfrighteous all the same time [sic].’

In 2006, Guerin, who had succeeded Bowen as BBC correspondent in Jerusalem, was moved to Africa after allegations of bias in her reporting on Israel. In 2015, a former BBC Chairman complained about Guerin’s Middle East reporting, saying she had implied ‘equivalence between Israeli victims of terrorism and Palestinians who have been killed by Israeli security forces in the act of carrying out terror attacks’. Perhaps, like Bowen, Guerin has a personal axe to grind?

Like many others, the BBC rejects or ignores historical reality in order to portray Israel as an illegal occupier of Arab lands. To underpin its false narrative, for many years the BBC has repeated Palestinian propaganda, ignored violence against their own people, and whitewashed their Jew-hate. This is sometimes blatant, sometimes subtle and often emphasised in reporters’ body language. But always the message is clear and consistent. Anecdotally, I can remember only one or two positive reports about Israel in the last 20 years. Even reports about the country’s remarkable success against Coronavirus must be tainted by false allegations about depriving Palestinians of vaccines. Israel’s contributions to disaster relief and other humanitarian actions around the world are almost always ignored.

There are some expectations that the corporation’s new Director General, Tim Davie, will end the BBC’s heavily slanted coverage of this issue as well as many others. He recently told staff: ‘If you want to be an opinionated columnist or a partisan campaigner on social media then that is a valid choice, but you should not be working at the BBC.’ But he has an uphill struggle against institutional bias. In reply to a recent complaint made to him about Jeremy Bowen, Davie’s staff wrote: ‘We are confident in his ability to provide analysis of this often complicated situation with his own insight and knowledge. … We do not agree Jeremy displays a bias against Israel.’

There is little likelihood, without firm intervention by the British government, that the BBC will relinquish its leadership of the global anti-Israel movement that has contributed to so much suffering, misery and bloodshed. As British journalist Melanie Phillips writes: ‘It is no exaggeration to say that when it to comes to Israel, the issue is not BBC bias. It is BBC incitement to baseless hatred’.