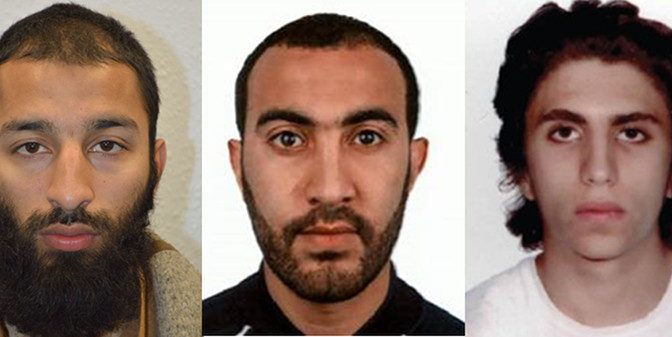 TODAY we face the most serious threat to Britain since the Germans bombarded our cities with V1 and V2 missiles in 1944.

Eight Islamic terrorist plots have targeted this country since the end of March – more than one a week.

Five were disrupted by the security services but the three that got through have left dozens dead or with life-changing wounds.

We must confront this violent challenge to our way of life with the same defiance as our fathers met Nazi aggression.

This was the spirit of the police who shot dead three terrorists within eight minutes of the attack unfolding at London Bridge.

It was also the spirit of ordinary citizens who ran at the terrorists, hurling missiles at them to save their fellow Londoners.

It is the fighting spirit that we must all adopt, not candles, illuminations, teddy bears and group hugs.

The gloves must come off and we need to hold the Prime Minister to her strong words on Sunday that ‘enough is enough’.

When intelligence confirms that non-British citizens in this country are involved in extremism, they must be deported.

The threat these enemies pose to the lives of our people morally outweighs any risk to their own human rights.

British citizens who are involved and can’t be deprived of citizenship and deported or convicted in court should be interned.

One of the greatest dangers is from people from this country who have fought with the Islamic State in Iraq, Syria or elsewhere.

They have been bloodied in battle and involved in mass murder, torture and rape.

That makes it easy for them to kill again and they are trained, motivated and under orders to attack.

Four hundred have already returned; they are among those that must be deported or interned.

Around 150 have been killed and at least 400 remain who will try to come home. They must not be allowed to do so.

They are likely not only to kill our citizens but to inspire, recruit and train others. We must take a harder line against all forms of extremism, shutting down mosques, schools and Islamic organisations that incubate hatred, and seriously tackling radicalisation in prisons and universities.

The Government must also legislate to increase powers to monitor extremist communication on the internet and to close down sites and web pages used for radicalisation and terrorist training. The first police on the scene at London Bridge were unarmed yet courageously tackled the attackers with batons.

But they could not stop the killing. Had they been armed, lives would have been saved. A plan must be initiated to arm all police on the UK mainland as they are in Northern Ireland and every European country.

The Prime Minister said we must destroy the Islamic State in Iraq and Syria. This is long overdue.

Our action against IS has been feeble, allowing them to direct attacks worldwide including in the UK.

I hope Theresa May will now direct our forces to annihilate them.