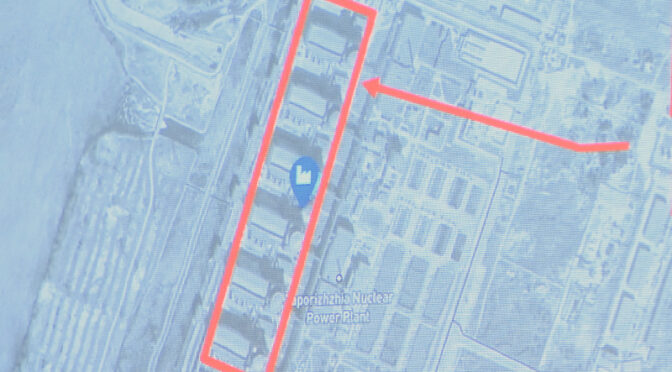 Europe’s largest nuclear power station, Zaporizhzhia in southeastern Ukraine, has been repeatedly shelled since Russian forces seized it in March, threatening a radioactive disaster potentially of the scale of, or even greater than, Chernobyl. It would contaminate the Black Sea and create a radiation hazard as far away as Germany – a game-changer in the Ukraine war, transforming it into a full-blown regional conflict.

Now Ukrainian military intelligence is warning that a Russian attack on Zaporizhzhia is imminent, with reports that Moscow has ordered energy workers stationed there to stay at home this weekend. What is not clear is who is actually carrying out the high-risk attacks we have already seen, as each side blames the other.

It makes little sense for Russia to shell a facility that it possesses and plans to use to supply power to Donetsk and Luhansk, except as a false flag operation intended to undermine global support for Kyiv. The other side of the coin is a false flag attack by Ukraine to achieve the opposite and perhaps draw Western nations deeper into the conflict as well as scaring Ukrainian staff at the plant into disrupting output. Despite deep international concern, including a debate at the UN Security Council a few days ago, neither Britain nor the US has directly apportioned blame, although both have sophisticated surveillance assets that ought to be able to identify the source of artillery fire directed at such a hugely sensitive location.

So far, although both sides claim to support a UN inspection at the plant, it has not materialised with Russia and Ukraine blaming each other for that as well. It is hard to see a way to avert disaster. One option could be for the UN to take control of Zaporizhzhia but it is unlikely — certainly in the time-frame needed — that could be agreed on, including by the UN which has demonstrated only toothlessness since the war began.

Meanwhile Moscow has been taking several embarrassing hits from Ukraine in recent days and weeks, including alleged attacks aimed at the Kursk nuclear reactor complex 55 miles inside Russia. In Crimea, Ukraine has inflicted a series of strikes, either by missiles, drones or partisans, including against the headquarters of the Black Sea fleet last month and damage to a power station and railway tracks this month. An attack on 9th August reportedly destroyed nine Russian warplanes at Crimea’s Saky airbase.

Despite President Biden publicly discouraging offensive operations beyond Ukraine’s borders, these are sound tactics from Kyiv, which has so far been unable to mount a major counteroffensive against the Russian advance. But strikes inside Russia will have hit hard and Crimea is the holy of holies for Moscow — attacks there can’t go unanswered.

In any case it looks like Moscow could be preparing for another significant offensive before winter sets in. A major build-up of Russian fixed wing and rotary aircraft as well as precision munitions along the borders of Ukraine, in Belarus and east of the Donbas has been reported, potentially doubling previously available forces. Russia’s increased armed reconnaissance activity around Kharkov in recent days may hint at a possible objective.

But if Putin is unable to dramatically hit back by conventional means he might well be tempted to lash out with weapons of mass destruction. Fearing escalation, he is unlikely to resort to battlefield nuclear weapons, but could stop just short. A strike on Zaporizhzhia would inflict serious damage without needing to drop a nuclear bomb. We have seen similar disasters in Syria, where chemical weapons were used.

Putin’s extensive disinformation campaign in support of those attacks in Syria foreshadows the obfuscation that is likely to accompany the next stage of the war in Ukraine. It would blunt the Western reaction if anything, God forbid, were to happen to Zaporizhzhia.