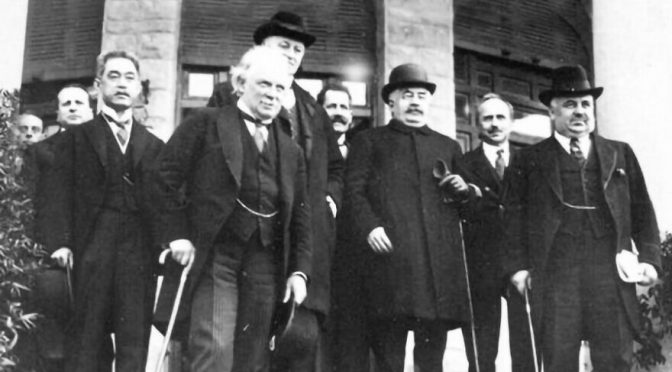 by Richard Kemp and Hugh Kitson

The British government should be supporting the Trump peace process, rather than punishing Israel for exercising a right that was granted to it under international law 100 years ago.

The legal right of the Jewish people to reconstitute their historic homeland was recognised at the San Remo Conference of 1920 and by virtue of the Mandate for Palestine that resulted from it. This was unanimously endorsed by all 51 nations that were in the League of Nations, which then constituted the entire international community.

International lawyer Cynthia D. Wallace writes: ‘The Mandate system had been set up under Article 22 of the Covenant of the newly formed League of Nations that had arisen out of the Paris peace process to deal with such post-war emerging territories. At San Remo, the Mandate for Palestine was entrusted to Great Britain as a “sacred trust of civilization,” and the language of the Balfour Declaration was enshrined in both the San Remo Resolution and the League Mandate, which stand on their own as valid international legal instruments with the full force of treaty law.’

Wallace is by no means the only international lawyer who recognises that the right of the Jewish people to reconstitute their national home in their historic homeland was enshrined in international law at San Remo. At the heart of the historic Jewish homeland was the Old City of Jerusalem and the territory today known as ‘the West Bank’.

Territorially the legal right of the Arabs to self-determination was accorded to them by the Mandates for Syria and Lebanon (under the French), and Mesopotamia—now Iraq—(under the British), and later in Transjordan, which was originally part of the Mandate for Palestine.

The Mandate document legally obligated Britain, as the Mandatory Power, to work with the Jewish Agency to create suitable conditions for the Jewish National Home and to encourage Jewish immigration and close settlement of the land—i.e. any and all parts of the land west of the Jordan River—with the view to ultimate self-government (i.e. statehood). While the civil and religious rights of the existing non-Jewish population were to be protected, the political rights of self-determination were reserved for the Jewish people. In fact the Arabs are not specifically mentioned in the Mandate for Palestine document at all.

Basically, due to Arab insurgency under the leadership of the Mufti of Jerusalem, the radical Islamist Haj Amin al-Husseini, who was fundamentally opposed to any Jewish presence in Palestine, Britain failed to carry out its legal obligations. The 1939 White Paper severely restricted Jewish immigration at a time when millions in Europe were desperate to flee from the Nazis. The British policy in the 1939 White Paper stated that the total Jewish population of Palestine must not exceed one third, which would make the Jewish National Home ungovernable by the Jews, despite having been legally granted the political rights of self-government.

The Permanent Mandates Commission of the League of Nations deemed the 1939 White Paper to be a violation of the Mandate, and in the House of Commons Winston Churchill spoke vehemently against the majority Conservative government’s policy. Instead of being able to find refuge in their National Home, many of the Jews in Europe were slaughtered by the Nazis. There is no doubt that the British policy has left the blood of at least hundreds of thousands of Jews on our hands.

The rights given in the Mandates enshrined in the UN Charter

The Atlee-Bevin government became opposed to the whole concept of there ever being a Jewish state, and actively opposed it—in other words a complete betrayal of the Mandate. A rigorous naval blockade of Palestine was used to stop Jewish survivors of the Holocaust—most of them penniless refugees who had lost all their families, and with nowhere else to go—from reaching their ancestral homeland. From 1940 onwards some 3,000 Jews drowned at sea.

The 1947 Partition Plan—UNGA Resolution 181—is often seen as sanctioning the legal right of the Palestinian Arabs to a state west of the Jordan River. UN General Assembly Resolutions are not legally binding, they are no more than recommendations. If the Arabs had concluded an agreement with the Jews, then that would have been binding in international law. The Arab rejection of Resolution 181 effectively rendered it null and void.

Acquisition of territory through war

International law is crystal clear about prohibiting the acquisition of territory through war. This applies to the Arab invasion of the newborn State of Israel on May 15, 1948. The Arab Legion was led by a serving British Army general, Sir John Bagot Glubb (aka ‘Glubb Pasha’). One would presume that, as a senior serving British Army officer, he would have been under orders from Whitehall. In leading this illegal invasion, Britain itself was arguably in breach of Article 2 of the UN Charter. Moreover, the Jordanians ‘ethnically cleansed’ their conquered territory of its Jewish population, which today is considered a war crime. Britain stood by and watched it happen. Strange how everyone is silent on that one.

International lawyer Andrew Tucker, director of the Hague Initiative for International Cooperation (thinc.), says: ‘Jordan, Syria, Egypt had no claim to Jerusalem or “the West Bank”—on the basis of any doctrinal principle of international law.’

Jordan’s subsequent annexation of its conquered territory was only recognized by Britain, Pakistan and Iraq. The United Nations never recognized Jordan’s sovereignty over the territory it renamed ‘the West Bank’. Neither did the Arab League. Quite simply, as a result of a ‘war of aggression’, it was illegal under the UN Charter, which is treaty law.

The Six-Day War and Resolution 242

In 1967 Israel regained the territory that was originally mandated to be part of the Jewish homeland in a defensive war that was intended to exterminate the Jewish state. Again, the Arab attack was illegal.

UN Security Council Resolution 242 does not demand that Israel retreat from all the territory that it took control of in the Six-Day War. It calls for all parties to be able to live ‘in peace in secure and recognized boundaries’. It was deliberately worded that way because the UN Security Council then recognised that the 1949 Armistice Lines, which are not recognised borders in international law, were not secure. Since then Israel has entered into a peace treaty with both Egypt and Jordan, and handed back about 90 percent of the territory it gained in 1967.

Resolution 242 and the Palestinians

At the time of Resolution 242, the people today known as ‘the Palestinians’ were not considered part of the problem, as they were not an identifiable national entity at that time, let alone a sovereign state. In 1988 Jordan renounced its territorial claim to Jerusalem and ‘the West Bank’ in favour of ‘the Palestinians’. Because Jordan had acquired the territory illegally—even if Britain backed them in doing so—Jordan had no legal power of disposition to pass it on to a third party. What Jordan did was a violation of the international law principle of ex injuria jus non oritur—i.e. illegal acts cannot create law.

There is no doubt that in international law the State of Israel has the superior claim of sovereignty over ‘the West Bank’ and all of Jerusalem.

Which brings us to UNSC Resolution 2334. According to the UN Charter, only resolutions under Chapter VII are legally binding. UNSC Resolution 2334 is a Chapter VI resolution. The United Nations is not a legislative body; it is a political body, even though they might like to think they are the former, as do the media. UN resolutions express the opinions and political will of the nations that vote for them, and have no force in law. Interestingly, if Resolution 2334 were enforceable, which it is not, it would be in breach of the UN Charter (Article 80), which is an instrument of international law.

The Palestinians were offered that through the ‘Oslo’ peace process which they have squandered. Had they concluded the Final Status Negotiations with Israel they would now have a state. Time and again they have been offered a state, the last time being in 2008 when they were offered nearly all of ‘the West Bank’, and even the Old City of Jerusalem, in return for the end of the conflict. Again they turned it down.

The reason? Because the Palestinians refuse to acknowledge the right of the Jewish state to exist. This is the issue that is at the very root of the Israeli-Palestinian conflict, not settlements. The truth of the matter is that the Palestinian leadership want the destruction of Israel more than they want their own state.

The Trump peace plan with his ‘deal of the century’

US President Donald Trump has called the Palestinian bluff, and offered a generous financial package if they are prepared to live in peace beside the Jewish state.

The British government should be supporting this peace process rather than punishing Israel for exercising a right that was granted to it under international law 100 years ago. By imposing sanctions on Israel we will merely embolden the Palestinian Authority to continue its incitement to hatred and terrorism against Israel, and push any prospect of peace further away. Those who will suffer the most are the Palestinian people themselves.

• This article is based on a letter written by filmmaker Hugh Kitson, producer of Whose Land, retired British Army officer Col. Richard Kemp CBE and the Marquess of Reading to Crispin Blunt, MP, in response to a letter sent to the British prime minister and foreign secretary on 1 May 2020 by members of the House of Commons and the House of Lords claiming that Israel extending its sovereignty to the West Bank would constitute a violation of international law.