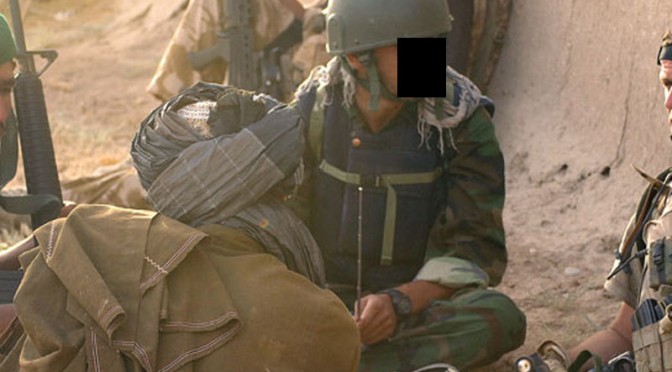 At this very moment, Afghan interpreters who put their lives on the line for British forces in Afghanistan are being murdered by the Taliban. It is an act of betrayal for the British Government to do nothing to help them.

I have worked intensively with interpreters in the Balkans, in the Middle East and in Afghanistan. They are more than just translators – important as translation is. They are also vital for reading the situation on the ground.

The culture of a foreign war zone is often completely alien to the British soldier.

And it is the interpreter who explains the way things work, who can best judge sensitive, often dangerous situations, and who tells you what people really mean when they say something to you.

British troops have depended on interpreters for their survival

They have an in-depth knowledge of very complicated local loyalties, individual agendas and tribal alliances.

There have been numerous cases in which British soldiers’ lives have been saved by interpreters warning of volatile situations that we simply could not understand or foresee. They can often identify suspicious activity in a way we cannot.

I have seen these men put their lives on the line for us.

They would be right in the front line alongside our troops. They went on patrol with infantry soldiers in the Green Zone in Helmand Province – the most dangerous job in the world.

Some interpreters got physically stuck in and administered first aid to our men. They have helped carry wounded British soldiers to helicopters and saved their lives.

They were an identifiable part of British forces in a British Army uniform and they faced at least as much danger as us, if not more. The Taliban likes to single them out as collaborators.

When they return home, they face huge risks. By contrast, we go back to the base.

You would be pushed to find any officer who did not feel allegiance to their interpreters, who become effectively just like your own soldiers. When I was in Afghanistan in 2003, I had the same interpreter for six months.

He was a vital member of my team. I would have risked my life for my interpreter, and he for me.

There is no doubt in my mind that those who now face a real threat to their lives, or the lives of their family, should be allowed refuge in Britain. That doesn’t mean every interpreter but those genuinely in danger.

We take into this country vast numbers of legal and illegal immigrants who have far less claim to be here. We fail to protect interpreters who help us to fight terrorism while tolerating the presence of individuals connected with extremist violence because European legislation won’t allow us to expel them.

It is unlikely, but possible, that British forces will go back into Afghanistan.

How could we look these men in the eye and ask for their help again, having let them down so shamefully?

And whether we return or not, our treatment of interpreters will be known in other countries where the British Army fights in the future.

If we betray the Afghan interpreters, it will be very hard to recruit interpreters elsewhere. In all my 30 years of military service, we have been absolutely dependent on them.

We couldn’t possibly do our job without their support. If we can’t recruit them, it will make the British Army much less effective and put British lives in danger.