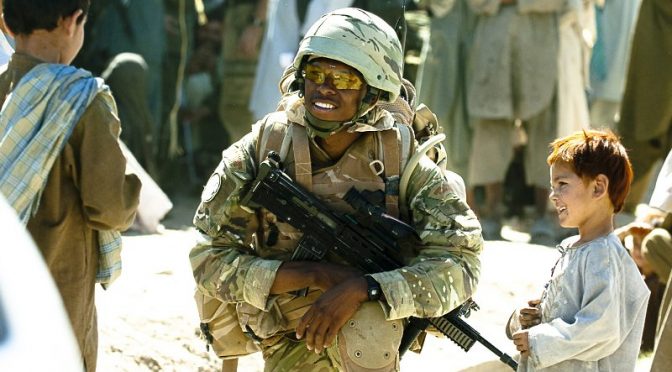 Last week General Lord Richards, former Chief of the Defence Staff and the UK’s most senior military officer, made an extraordinary allegation. Speaking on the BBC, he said that elements of the British establishment in Whitehall think their own soldiers are “bad,” and terrorists are “freedom fighters.”

Lord Richards’s assertions have far-reaching significance both within the UK and more widely, affecting the US, the prosecution by the West of the war on terror, and British relations with the State of Israel. Yet they have gone largely unnoticed.

Lord Richards was talking about the ongoing legal campaign against British troops who have fought in Iraq and Afghanistan – the first time in history that any government has turned on its own armed forces in such a way.

1,492 cases of alleged abuse in Iraq are under investigation, and over 600 in Afghanistan. Most of these cases involve allegations against multiple servicemen, so the number of troops under scrutiny can be counted in the thousands. We are not talking here about minor misdemeanours but the most serious forms of abuse including rape, torture and, in Iraq alone, 235 accusations of unlawful killing.

Some soldiers have been under constant investigation for more than 10 years. Some have been acquitted during preliminary investigations or at court martial, only to be dragged back to face repeated legal inquiries and judicial hearings. In some cases, there have been as many as five investigations into a single incident.

Thousands of men who have volunteered to put their lives on the line for their country, and who have been involved in the most traumatic events imaginable, including seeing their close comrades torn apart beside them, have been forced to re-live their experiences over and over again under intense legal scrutiny. Families have broken up, jobs have been lost, lives have been ruined. In some cases, soldiers have attempted or contemplated suicide.

The British government does not seem to have grasped that if there were any foundation to accusations of abuse on this scale, it would amount to a wholesale breakdown of military order and control. This in an army with an unbroken record of fortitude, courage and iron discipline under even the most formidable and perilous circumstances. Of all the great armies on both sides that fought throughout the First World War, the British Army was the only one that did not suffer major mutiny on the front line. Yet we are expected to believe that, in the far less harsh circumstances of Iraq and Afghanistan, their great grandsons went to pieces.

I served for 30 years in the British Army. I know for certain that this could not have happened. There will no doubt be some truth in a few of the allegations, as is inevitable when human beings go to war. But the overwhelming majority are motivated by a combination of greed and anti-British vindictiveness by the Iraqi and Afghan accusers and by their British lawyers. At the end of one five-year public inquiry into the alleged torture and murder of detainees, the British soldiers involved were exonerated and the chairman, a former high court judge, concluded that the claims amounted to “deliberate lies, reckless speculation and ingrained hostility.”

This sustained vendetta has only been possible because successive governments have paid Iraqis and Afghans to bring charges against our soldiers, using British taxpayers’ money. Unscrupulous, politically motivated lawyers have scoured Iraq and Afghanistan to find people willing to make complaints. Or more accurately, lacking the courage themselves to set foot in such dangerous places, they have paid local agents on the ground to do it for them. Two law firms are themselves now under investigation for abusive practices, including unlawful soliciting and withholding evidence.

And now we have General Richards’s allegations. He is not some embittered maverick with a grudge against the government. He is one of the most respected, thoughtful and measured chiefs of staff since the Second World War, with unrivalled high command experience in combat. He has been at the heart of the British establishment for decades. If anyone understands the behind-the-scenes realities of the Whitehall corridors of power, he does.

What he is saying is that those in the establishment with the attitudes he has expressed are so powerful that they have for years overridden the entire top-level British military hierarchy who are responsible not only for advising the government and directing the armed forces but also for looking after the interests of their men. He is saying that they have suborned successive government ministers and senior civil servants who have constitutional responsibility for preventing abuse of the armed forces.

Over several years these ministers, permanent secretaries, generals, admirals and air marshals have been swept aside in pursuit of a corrosive drive to discredit our troops. General Richards’s can be the only explanation for the government continuing to inflict such needless misery on these brave men.

The direct effect on the armed forces is obvious. Throughout history British people have been ready and willing to volunteer to fight for their country whenever the need has arisen. But how can we count on them to do so in future if, in addition to the horrors and dangers they face in battle, they can expect to be stabbed in the back when they return home?

There are other, wider effects too. These allegations have led many people in Britain and elsewhere to doubt the integrity and honour of our troops, especially those who are already sceptical. This is a serious danger, as no nation’s armed forces can operate effectively without the support of the home population. And it has added a new dimension to the prevalent distrust of those responsible for the political direction of war since the Afghan and Iraq campaigns.

This can only further undermine our national will to engage in future conflict in defence of our people or to support our allies, including the United States, thus weakening the Western world. That of course is the main objective of the politically driven lawyers and others involved in hounding our troops.

Equally serious, false allegations of this sort incite violence and act as a catalyst for terrorism. The public airing that these accusations receive has not been missed by radical preachers in Europe, the US, the Middle East and Asia, who will have exploited them to recruit and motivate in their violent cause. For their purposes, such allegations are enough; the substance or otherwise is irrelevant.

Where does Israel come in? If powerful members of the British government establishment can turn on their own servicemen and undermine their national defences, then it is hardly surprising that they would also be prepared to turn on a friendly country and its armed forces in furtherance of their mendacious objectives.

A pro-Arab and anti-Israel lobby has dominated the British Foreign Office since even before the birth of the Jewish State. But General Richards’s explanation sheds further light on the unjust attacks against Israel’s defensive campaigns in Gaza and the West Bank, as well as false accusations over settlements and so-called occupation policies emanating from parts of the British government.

This is also highly dangerous. As well as directly inciting terrorists to further violence against Israel, it encourages the Palestinian leadership in its demands for statehood without negotiation, which in turn also inflames violence and helps perpetuate the conflict.

Although many of the actions of the Obama administration have had a deleterious effect on America’s armed forces, we have not yet seen a legal campaign on a comparable scale in the United States. Hopefully any such attempt would be blocked in a nation that seems to support and value its armed forces far more than does any European country. But Americans must watch out for it. What occurs on one side of the Atlantic sooner or later creeps across to the other.

Neither have we seen legal action on this scale elsewhere in Europe. That is most likely because the opportunity is lacking, as no European country has been prepared to deploy its forces in combat missions to the extent that Britain and America have.

Although government leaders refuse to admit it, Britain and the West have been involved in a global war against Islamic jihad for more than 15 years. It will continue for generations to come. How can we hope to fight it effectively when we allow ourselves to be attacked from within on so many fronts?

We knew already about the animosity among radical Muslims within our own countries and their readiness to strike at home. We have been reminded of that in murderous attacks across Europe in the last year, as well as many more plots that have been foiled, including an attempt in London only a few days ago.

Now we learn from General Richards that we also have an enemy at the heart of government: nothing less than a conspiracy controlling policy and undermining our national defences.

We can be sure that their motive for favouring enemy “freedom fighters” over our own forces is a desire to appease radical Muslims both at home and abroad, which infects so much of Europe’s political elite and mainstream media.

They have shown themselves only too willing to throw the men who defend our country to the wolves in a futile attempt to please those who wish to substitute their Islamic culture for our own.

The Prime Minister cannot ignore General Richards’s allegations. It is vital for our country and the world that she ends this cowardly and dangerous cult of appeasement, stands up for our Western Judeo-Christian values above all others, and defends our soldiers with as much courage as they show in defending us. To achieve this, it is vital that the conspirators General Richards has named are identified and purged from power and influence.