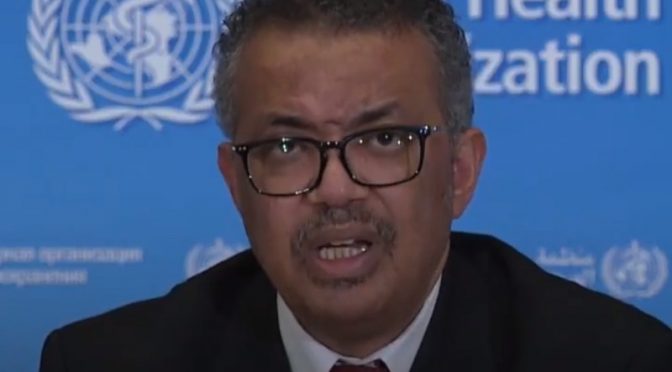 Article published in The Daily Telegraph, 19 May 2020. © Richard Kemp

The World Health Organisation is launching an ‘impartial, independent and comprehensive’ investigation into the handling of the Coronavirus pandemic. That is like getting the poacher to probe the disappearance of the pheasants. The WHO itself should be under investigation for its own response, which has sacrificed medical objectivity for a Chinese dominated political stance. Hardly surprising when its director general is not a physician but a politician.

Tedros Adhanom Ghebreyesus has a track record of miscalculation and misjudgement. In 2017 he appointed Robert Mugabe as a WHO Goodwill Ambassador. In a forestaste of his public pronouncements on China’s handling of coronavirus, Tedros praised Mugabe’s health policies when the reality was that he had presided over a backsliding in the country’s healthcare – not to mention his savage and widespread human rights abuses.

The WHO ignored Taiwan’s early warning in December about human-to-human transmission of Covid-19, preferring to parrot China’s denial of that fact for a month. The Canadian head of WHO’s Covid-19 response team showed his apparent contempt for Taiwan by refusing to answer media questions on its relationship with the WHO. Taiwan remains excluded from the WHO despite being one of the most successful countries in the world in containing the virus. But of course the Chinese Communist Party sees Taiwan as an enemy which it has vowed to conquer before the 100th anniversary of Mao’s revolution in 2049.

The WHO continues to repeat Chinese propaganda as though it were the truth. Despite Beijing’s cover-ups, silencing of its own medical experts and institutionalised lack of transparency, the WHO praised the Chinese transparent response which it said had protected the international community and prevented or delayed hundreds of thousands of deaths globally. The reality is that China acted irresponsibly from the outset, including allowing worldwide travel from Hubei despite isolating the province from the rest of China. This policy was effectively endorsed by the WHO when it advised against restricting travel from China, saying it would do more harm than good.

A country whose supreme court pronounced penalties up to death for anyone breaking quarantine regulations is hailed by Tedros as an example to the world. The WHO uses official Chinese infection and death rates in its analysis despite Beijing’s clear underestimation and distortion of these statistics, excluding Covid-19 deaths at home and ignoring many asymptomatic cases that have been documented elsewhere. The WHO’s face-value reliance on figures coming from a dictatorship that systematically distorts facts for its own advantage in every area must result in unsafe guidance to countries around the world that depend on its so-called expertise.

Under current management a WHO investigation of China’s role in the spread of Covid-19 wouldn’t be worth the paper it’s printed on. Yet an impartial, objective and comprehensive investigation is vital, both to help contain the current pandemic and prevent future such events.

The UK is already one of the major funders of the WHO and has pledged £65 million to help fight Coronavirus. British taxpayer’s money should not be wasted on a body whose political agenda has led to such disastrous failure and our government has a responsibility to demand immediate reform.