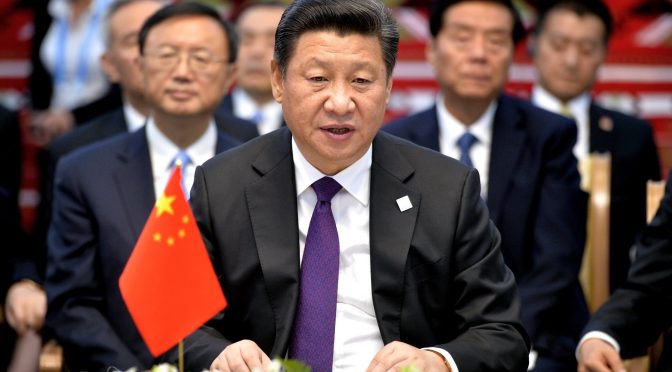 The coronavirus pandemic is a 9/11 moment. Al Qaida had been at war with the West for years before the destruction of the twin towers. But it took that barbarism to galvanise its largely supine prey into action.

Now we have Covid-19. Unlike 9/11 we have seen no evidence so far that China deliberately unleashed this virus on the world. There is certainly evidence, however, that it resulted from the policies of the Chinese Communist Party and that Beijing’s habitually duplicitous and criminally irresponsible actions allowed it to spread around the globe, leading to tens of thousands of deaths that could have been avoided.

Commentators and politicians today worry that the current situation might trigger a new cold war with China. They fail to understand that, in a similar but much more far-reaching pattern to the jihadist conflict, China has been fighting a cold war against the West for decades, while we have refused to recognise what is going on. The reality, in Beijing’s book, is that the cold war between China and the West, which began with the communist seizure of China in 1949, never ended. Despite the Sino-Soviet split and subsequent US-China rapprochement in the early 1970s, for the Chinese leadership the US was still the implacable enemy.

China today is by far the greatest threat to Western values, freedom, economy, industry, communications and technology. It threatens our very way of life. China’s objective is to push back against the US and become the dominant world power by 2049, a century after the creation of the People’s Republic. Dictator for life Xi Jinping has no intention of doing this through military conflict. His war is not fought on the battlefield but in the boardroom, the markets, the press, universities, cyberspace and in the darkest shadows.

Those who argue China’s right to compete with the West in free markets and on a level playing field seem not to comprehend that Beijing has no free market and no intention of playing on a level field. The world’s leading executioner, China is an incomparably ruthless dictatorship that tortures, disappears and imprisons its people at will and controls its massive population through a techno-surveillance infrastructure that it’s busy exporting around the world to extend its political and economic control to us.

For decades, China has been working on its three-pronged strategy: building its economy and fighting capability, including intelligence, technology, cyber and space as well as hard military power; developing global influence to exploit resources and secure control; thrusting back and dividing the US and its capitalist allies.

China has built its economy on Western money and at Western expense, by industrial-scale theft of intellectual property and technology, copyright violation, illicit data mining, cyberwar, deceit, duplicity, enslavement and uncompromising state control of industry and commerce. It continues to expand its already immense influence through a Belt and Road Initiative that marches across the globe; massive investment in Africa, Asia, Europe, Australasia and north and south America; and direct aggression in the Pacific including the South China Sea (where Beijing’s artificial island programme has created one of the greatest ecological disasters in history).

All of this is supported by a multi-million dollar propaganda operation, in President Xi’s words: ‘to tell China’s story well’ – in other words: to advance the ideology of the CCP everywhere. This includes buying support or silence from global media outlets, threats and coercion. Just one high profile example of this influence occurred last year when the US National Basketball Association was forced to make a grovelling public apology after the Houston Rockets’ general manager tweeted in support of pro-democracy campaigners in Hong Kong.

Although military conflict is not China’s preferred strategic instrument, Beijing has not neglected fighting capabilities, spending an estimated $230 billion annually, second only to the US. Xi has been rebuilding his forces on an unprecedented scale, with particular emphasis on a naval war with America. Planned military contingency options also include moves against Taiwan and other territories it intends to control directly. China has also now become the second biggest arms seller in the world, including to countries subject to UN sanctions such as North Korea and Iran. This month, 15 armoured vehicles were delivered to Nigeria, including VT-4 main battle tanks, already in service with the Royal Thai Army and, like most of China’s defence equipment, incorporating technology stolen from the West. China’s arms exports are not motivated primarily by revenue generation, but as a means to impose influence and control, create proxies and challenge the US.

Chinese investment penetrates every corner of the United Kingdom, giving unparalleled influence here as in so many countries. Plans to allow Chinese investment and technology into our nuclear power programme and 5G network will build vulnerability into our critical national infrastructure of an order not seen in any other Western nation. Even the BBC, which receives funding from China, has produced and promoted a propaganda video supporting Huawei, to the alarm of some of its own journalists. All this despite MI5’s repeated warnings that Chinese intelligence continues to work against British interests at home and abroad.

The Chinese government has spent billions of dollars establishing Confucius Institutes around the world, mainly at universities. There are over 500 globally, including 29 in the UK and over 70 in the US. Ostensibly aimed at promoting Chinese culture, these bodies are used to infiltrate universities and high schools to indoctrinate students in communist ideology, as well as for espionage activities. More than 100,000 Chinese are studying in the UK. Last year, MI5 and GCHQ warned universities their research and computer systems are under threat from Chinese intelligence assets among these students. The Director of the FBI , Christopher Wray, said recently that China was aggressively exploiting US academic openness to steal technology, using ‘campus proxies’ and establishing ‘institutes on our campuses’. More broadly he concluded that ‘no country poses a greater threat to the US than Communist China’.

Few in the West fully recognise the threat to our own economies, security and liberty. Many who do refuse to speak out for four reasons. First, fear of coming into China’s crosshairs, provoking economic harm or character assassination. Second, fear of accusations of racism, a concern readily exploited by the Chinese state whose own egregious racism is only too obvious. Third, belief that our liberal values can change those that oppose us. The hope that Chinese exposure to free trade, including entry into the WTO in 2001, would have this effect has proven woefully misguided and served only to strengthen Beijing’s oppressive regime. Fourth, many political leaders, businessmen, academics and journalists have been bought and paid for by Beijing whether by financial incentive or blackmail.

How can the West fight back? Although still militarily and economically inferior to the US, China is a formidable and growing economic power, interwoven with Western economies to an unprecedented degree. We must begin to divest from and sanction China, repatriate and use alternative sources of manufacturing and technology, restrict capital investment there and curb Chinese investment here, especially in our infrastructure.

America will have to lead the fightback as it did previously in the cold war, but success will require Europe and our allies around the world to stand with them for the long term. This is not a party political issue, but must become a fundamental element of enduring Western grand strategies. This is the task of decades and will be high-risk and costly. The alternative is to remain on the hook and in hock to the Chinese communist state and let future generations suffer the incalculable consequences of our continued purblind inaction.