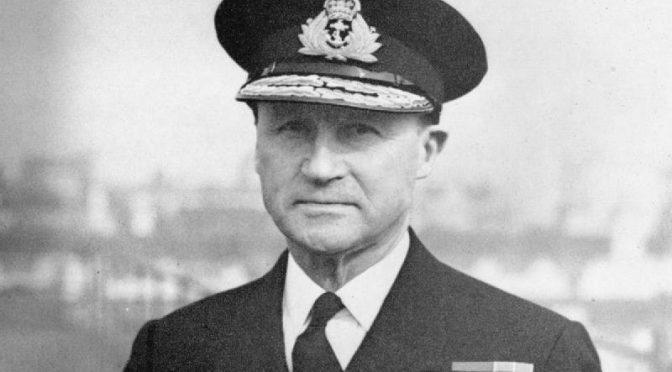 A version of this article was first published in the Essex County Standard on 4th August 2017. © Richard Kemp

I saw old-fashioned British patriotism in Colchester after watching the movie Dunkirk at the Odeon last week. Tommy, a young soldier played by Fionn Whitehead, read the last words of Churchill’s ‘we shall fight on the beaches’ speech, the credits rolled and the audience broke into spontaneous applause. Exactly the reaction you would have seen to the newsreel report of Dunkirk in a Colchester cinema in June 1940.

The applause was not for the film, but for the Dunkirk spirit of embattled British soldiers, sailors, airmen and civilians pulling together in the face of the mind-numbing peril it so powerfully conveyed.

Unknown to most in the cinema, a former pupil at Colchester Royal Grammar School pervaded every moment of the film, though his only appearance was a single mention of the name: Ramsay.

Vice Admiral Bertram Ramsay, at CRGS before joining the Royal Navy in 1898 aged 16, masterminded the Dunkirk evacuation and by doing so won the Second World War. Why?

In words Tommy reads out in the film, Churchill said to the Commons on 4 June 1940, the day Dunkirk ended: ‘We must be very careful not to assign to this deliverance the attributes of a victory. Wars are not won by evacuations’. But the evacuation of the British Army from Dunkirk — against all odds — was the turning point that paved the way to Allied victory over Nazi Germany five years later.

With the British Expeditionary Force routed through France and Belgium by the scything German blitzkrieg, General Brooke, commander of II Corps — which included 2nd Battalion The Essex Regiment — lamented: ‘Nothing but a miracle can save the BEF now’. Ramsay delivered it.

At a meeting in his underground headquarters beneath Dover Castle, Ramsay and Churchill envisaged the rescue of 30,000 men from the beaches. Within a week, Ramsay launched Operation Dynamo and nine days later had brought more than ten times that number back across the Channel, while under attack from all sides.

Ramsay rescued 338,226 battle-hardened soldiers who could be put to immediate use defending Britain. Their return made the threatened German invasion less likely.

Of even greater strategic significance, Dunkirk boosted the nation’s morale, giving hope after a long succession of military and political disasters. It steeled the country for the Battle of Britain, unleashed by the Luftwaffe the following month, and shaped the character and resilience of our nation for the rest of the war.

Dunkirk kept Britain in the war, enabling all that followed, culminating in the Allied invasion of Europe in 1944. Without Dunkirk, 400,000 British soldiers — five times as many as our entire regular army today — would have been killed or in prison camps in Germany. Churchill might then have found spurring the British people on to eventual victory an impossible task. That is assuming he had survived as Prime Minister.

In the movie, all the action is on the beaches, at sea and in the air. We don’t see the British and French rearguard forces that held the German army back from the evacuation zone.

Among the rearguard were troops from 2nd Battalion Royal Norfolks, now my regiment, the Royal Anglians. In a foretaste of the bestiality that was to come from the German war machine, 97 of their men were captured by the SS and machine-gunned against a farm wall in the hamlet of Le Paradis on 27 May, the first full day of evacuation from Dunkirk.

Without the fighting spirit and heroic sacrifice of the rearguard, the iron discipline and stoicism of the troops on the beach, the skill and courage of the RAF, the bravery and fighting prowess of the Royal Navy and the selfless patriotism of hundreds of civilian mariners, fishermen and yachtsmen, Dunkirk could not have succeeded.

Men from Colchester and Essex took part in each of these great endeavours, achieved, in Churchill’s words, ‘by valour, by perseverance, by perfect discipline, by faultless service, by resource, by skill, by unconquerable fidelity’.

Among them many pupils from Ramsay’s school, including V. A. White, serving with the Royal Artillery, who was wounded at Dunkirk. Some of these Old Colcestrians may have been saved by the 57-foot motor yacht Riis 1, whose home port is West Mersea. Then named White Heather, she steamed to Dunkirk on 1 June, ferried troops from the beach to bigger ships offshore under enemy fire and then made three crossings, carrying soldiers to England in waters infested by U-boats and mines and exposed to air attack. Glorious in her 97th year, she can be seen playing herself in the film.

This entire colossal effort would have achieved little without Admiral Ramsay’s guiding hand. What made him the man for the job? Long experience at sea, including fighting commands in the First World War, plus a genius for planning and improvisation. But above all he was a modernizer and pioneer of delegated, decentralized and flexible command. It is unlikely that any practitioner of the more orthodox methods could have achieved Ramsay’s miracle.

For Ramsay there was no letup after Dunkirk. He organized the sea passage of two new British divisions into France and their subsequent withdrawal, and drew up plans to defeat Operation Sealion, the German seaborne invasion of southern England, while the Battle of Britain raged overhead.

Churchill knew exactly what he had achieved at Dunkirk and increasingly sought Ramsay’s counsel. He had first known the teenage Ramsay around his time at CRGS, when young Winston was serving in the 4th Hussars under the command of his father, Colonel William Ramsay.

Ramsay’s younger son, Major General Charles Ramsay, also became a cavalry officer. He was Army commander in Colchester in the 1980s. Having been a pupil at his father’s old school, I also served under him as a junior officer with 2nd Royal Anglians in Hyderabad Barracks.

In 1942 Ramsay planned the amphibious landings in North Africa and in 1943 commanded naval forces for the invasion of Sicily.

Promoted to full Admiral, he was Eisenhower’s naval commander for D-Day, directing a fleet of almost 7,000 vessels and landing a million soldiers over the coast of France, a feat described as ‘a never surpassed masterpiece of planning’. The war had come full circle, and Ramsay with it.

Ramsay was a driven man and a hard taskmaster, but first-hand accounts show the affection his staff had for him. A ‘Ramsay Wren’ during Dunkirk and D-Day wrote: ‘The Admiral’s attitude to his junior staff was always impeccable. … We were a truly happy ship.’ In proper CRGS style, as D-Day approached he found time to play cricket with his headquarters staff.

Ramsay did not live to see the Allied victory he played such a crucial part in bringing about. Heading from Paris to Brussels for a meeting with Montgomery, his Lockheed Hudson crashed during takeoff on 2 January 1945. One of the most senior officers to be killed in the war, he is buried at St Germain en Laye.

In tribute to Admiral Sir Bertram Ramsay, knighted for his command at Dunkirk, the British writer A. P. Herbert, himself a naval officer in the First World War, wrote these lines after his death:

I ploughed a passage through the foam,
Dunkirk and Deal — Dieppe and Dover,
I brought the flower of Britain home
And took the fruit of freedom over.