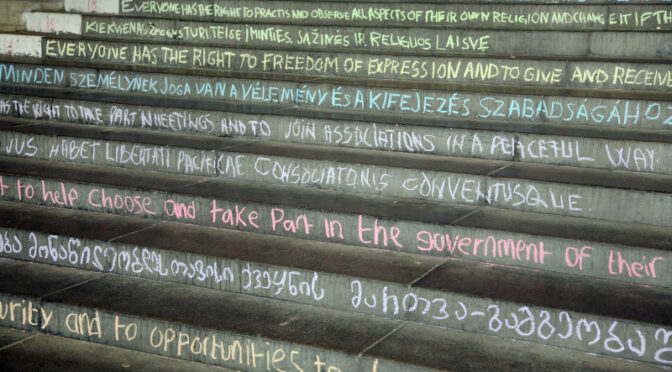 ‘Free, free Palestine — from the river to the sea.’ I was met, as so often elsewhere, by this ubiquitous chant from the standard issue protesters when I arrived at the University of Essex in the UK to give a talk last week. What river? What sea? I doubt many of them knew. Most of these students are fed such slogans when they are coaxed to come out and demonstrate by the campus rabble-rousers — a little bit of animation to distract from the monotony of student life on an autumn evening.

Their distraction comes at a cost. Not to me: I’ve seen and heard it all many times, often belted out with a bit more gusto and venom. The cost is to the Jewish students on campus who, even if they are not Israeli, are the real targets of Israel Apartheid Weeks and constant agitation against the Jewish state and anyone who supports it. The Jewish students have heard it all before too, but they have to live their lives alongside fellow students and sometimes professors who are demanding an end to the Jewish national homeland.

That is of course the meaning of ‘from the river to the sea’ — tearing down the State of Israel and replacing it with an Islamic state. For those who artfully deny that reality, Hamas, owners of the slogan, again helpfully explained what they intend in chillingly banal detail at a recent conference in Gaza.

The conference of officials, held in September, was entitled ‘Promise of the Hereafter — Post-Liberation Palestine’. In his opening remarks, Hamas leader Yahya Sinwar said: ‘The full liberation of Palestine from the sea to the river’ is ‘the heart of Hamas’s strategic vision.’ He meant from the River Jordan to the Mediterranean Sea, in other words, the entire territory of the State of Israel.

The conspirators plotting the downfall of a democratic UN member state came up with recommendations on laws to be applied in the conquered land, currency, borders with neighbouring states, international relations, confiscation of property and the use of existing resources and infrastructure.

They also determined how Jews are to be treated. Fighters, meaning Israeli soldiers and others who resist Hamas’s war of aggression, ‘must be killed’, clearly involving the massacre of hundreds of thousands of people. Jews who are fleeing are to be left alone to make good their escape or be prosecuted ‘for their crimes’. Others will be ‘integrated’ or given time to get out.

Jews who can be of use to the new state, including medical, engineering and technological experts and those involved in military industry, will be forcibly prevented from leaving so their skills can be utilised.

Active external supporters and facilitators of Israel — Jews and non-Jews — are to be pursued in order to ‘purge Palestine and the Arabhttps://www.flickr.com/photos/universityofessex/11322287594/in/photostream/ and Islamic homeland of the hypocrite scum that spread corruption in the land’.

How Jews that remain in the new Islamic state will be ‘integrated’ can be easily predicted, as the conference determined that its constitution will be a direct continuation of the Pact of Umar Bin Al-Khattab and Saladin’s rule in Jerusalem. This means second-class citizenship, extortion of their funds, forced deference to Muslims, curtailment of religious practice, recreational violence against them and the ever-present threat of imprisonment, torture, expulsion or death.

The treatment of Arabs who worked for or cooperated with Israel is not spelled out but it doesn’t need to be. It will be a continuation of current practice. Last week a Palestinian man was sentenced by a Hamas court in the Gaza Strip to death by hanging for ‘collaborating’ with Israel. Sometimes such offenders are dragged alive for miles around the streets of Gaza City behind motorbikes until they are just mangled lumps of lifeless meat.

This conference flies in the face of the gullible optimists who have suggested the terror group has somehow softened its stance on Israel. That narrative has been especially prevalent since the issuance of a political statement in 2017 that was designed to improve Hamas’s image by hoodwinking Westerners into thinking that the organization had reformed. While some pretend otherwise, this document did not supersede or amend Hamas’s 1988 charter which is explicit: ‘Israel will exist and will continue to exist until Islam will obliterate it.’

The 2017 document re-affirmed: ‘Hamas rejects any alternative to the full and complete liberation of Palestine, from the river to the sea’, to be achieved by ‘armed resistance’.

The 1988 charter also calls for the murder of Jews across the world, naked Jew-hate that was conveniently dropped from the 2017 statement. But in 2019, senior Hamas politburo member Fathi Hammad reiterated: ‘You have Jews everywhere and we must attack every Jew on the globe by way of slaughter and killing.’

Whatever is written down or spoken by Hamas or its apologists, the terror group’s repeated violent attacks on Israel, including the launch of more than 4,000 missiles at Israel’s civilian population in 11 days this May, demonstrate the indisputable reality. As always, Israel’s legitimate military response to this unprovoked aggression was used as an excuse to provoke furious demonstrations against Israel — and sometimes directly against British Jews at universities and on the streets.

Understanding Hamas’s intentions is more important than ever as it gains increasing traction among the Palestinian population. In April, Palestinian Authority President Mahmoud Abbas called off the first Palestinian elections in 15 years, fearing a humiliating defeat by Hamas. A poll in June showed surging support for the group, with 53% of Palestinians agreeing that Hamas is ‘most deserving of representing and leading the Palestinian people’, according to the Associated Press.

Those arguing that the Palestinian Authority has a different agenda from Hamas are wrong. Despite extensive subterfuge for the consumption of the international community, including implausible claims of support for a two-state solution, the PA shares the same ‘river to the sea’ doctrine for the destruction of Israel that British university students find so attractive. This is a constant theme in official PA media, publications and school textbooks. The research institute Palestinian Media Watch revealed four items in PA broadcast and print media in October alone promising Israel’s demise, including a speech by the PA’s highest religious authority, Grand Mufti Muhammad Hussein.

Of course none of this is going to happen because the Israel Defence Forces will ensure it does not. The malignant machinations of Hamas’s September conference and the genocidal designs of countless PA media broadcasts will remain a mere fantasy — albeit a dangerous fantasy guaranteed to incite further bloodshed. But when students and others call for ‘Palestine’ to be free ‘from the river to the sea’, it is this fantasy that they embrace: Jews massacred, expelled, enslaved, hunted down or allowed a precarious subsistence as second class citizens in a repressive Islamic state.

Demands for the elimination of Israel are by no means the only hostility to Jewish students at Essex university. In 2019 hundreds of students’ union members there, despite flourishing Christian and Muslim societies, tried to prevent the establishment of a Jewish Society. Sadly, the University of Essex is far from alone. According to research by the Pinsker Centre, a UK-based think tank, faculty bodies or students’ unions at a quarter of Britain’s top universities published potentially antisemitic statements condemning Israel at the height of the Gaza conflict this year, with an apparent correlation between those statements and antisemitic incidents on campus.

The response across the academic world when, a few weeks ago, after an independent investigation, Bristol University was forced to dismiss one of its professors, was equally troubling. Professor David Miller, a leading proponent of BDS, was accused of ‘harassment, targeting, and vicious diatribe shared … with his students’. Two-hundred-and-ten professors and lecturers from 74 separate British universities signed a letter protesting his dismissal and asserting ‘solidarity’ with him.

Most recently, last week, more than 500 academics signed a petition attacking Glasgow University in Scotland for apologising over an antisemitic article published in a journal on the university website. Their concern was not the blatant antisemitism in the article but the fact that the university apologised for it.

In an era where opposition to racism and discrimination against all other peoples is rightly at the top of university authorities’ and students unions’ priorities, why does this not apply to Jews? Why are Jews the exception? Calls for the violent erasure of the one and only Jewish state is not only tolerated, it is actively encouraged by some professors, faculty bodies and students union leaders. This causes many Jewish students to apply only to the few universities which are known to be less intolerant. It is time for university authorities to put a stop to these vicious demonstrations of antisemitic hate, and if they fail to do so, for the government to start cutting their funds.

Image: graffiti at the University of Essex. Source: Flickr