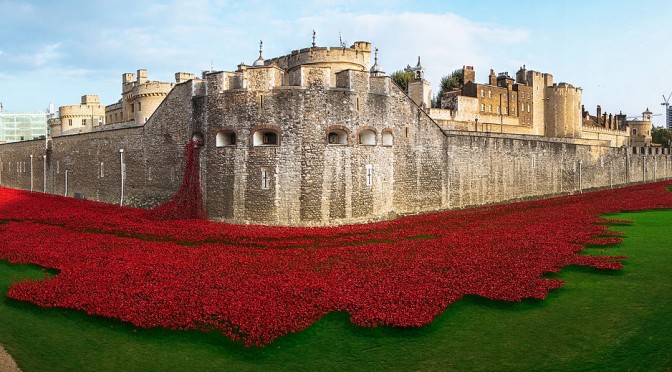 Crowds at the Tower are remembering past loss. But the need for young people to lay down their lives is unending

This week I joined the millions of visitors to the Tower of London’s poppy-filled moat. Most seemed deeply moved by Blood Swept Lands and Seas of Red, which gave them the opportunity to understand visually the vast scale of the sacrifice made by our fighting troops 100 years ago.

Their thoughts were no doubt in the past. Mine turned to the future. Among the crowds were school parties and it struck me that in the coming years we will still need teenagers like these to fight and to die for our country; to make the same sacrifices that were made by the 888,246 British soldiers, sailors and airmen each represented by a single poppy (pictured below) below the crowd’s down-turned eyes.

The rise of Islamic State in Iraq and Syria (Isis), with its threats and assaults on our citizens and national interests, is but one reminder of the constant perils that lie ahead. Even with the march of technology, it will remain not drones and robots but young men and women who must ultimately stand in the path of aggression against us.

Despite many often laudable efforts, modern society remains unable to prevent war. But sometimes by accident, sometimes by design, many elements within it conspire to undermine the ethos and spirit necessary to foster a readiness to make the supreme sacrifice that we need to defend our country.

One hundred years ago patriotism, duty and honour were imbued in our youth through the education system. This vital contribution enabled the British Army to prevail in the most horrific conditions during the Great War. From my own school, Colchester Royal Grammar, which then had only 200 pupils on the roll, 127 former pupils volunteered for the front immediately the war broke out.

Contrary to popular myth this urge to duty was not extinguished by years of mud and carnage. In 1917 my great-uncle, Philip Duncan, won his fight against bureaucracy to get out of a reserved occupation in London and into the trenches. As he knew was likely, he was killed in action three weeks later, commanding a platoon at Passchendaele.

Today patriotic sentiment is denigrated and many schools in this country exclude army careers briefings for their students and will not allow the formation of cadet detachments. Teachers are encouraged to show such propaganda films as Michael Morpurgo’s Private Peaceful, with their portrayal of soldiers in the Great War that manifestly distorts the reality of discipline, leadership and military ethos prevalent in that era, yet incomprehensible to many today.

The ever-encroaching European Union, with its relentless drive to undermine national identity and create a single, homogeneous and insipid superstate to which no one can relate emotionally and for whom no one would fight and die, is working hard to destroy the spirit that motivated young men to serve their country in 1914. The EU’s intention of preventing war between European nations will not succeed under serious pressure. And how effectively can it respond to external threats on its borders, such as the aggressive actions of Moscow in Ukraine?

British armed forces are also under ever-increasing attack by insidious political warfare from within. Incited by profiteering and politically motivated lawyers and human rights activists, false legal claims are brought against our soldiers to reduce and restrain their fighting effectiveness. A continuing preliminary examination into allegations against troops in Iraq could lead to the grotesque spectacle of British soldiers being arraigned in front of the International Criminal Court, a distortion of its purpose — which is to deal with brutal dictatorships.

This malicious and corrosive scheming is compounded by attempts to apply European human rights legislation to the battlefield in a way that is incompatible with the realities of military combat. For example, the assertion that a soldier in battle somehow has a “right to life” under this legislation can only shackle military commanders and perversely endanger the lives of their men.

In 1914 British political leaders were deeply reluctant to go to war in Europe. But when they felt they had no other choice, they dedicated themselves wholeheartedly to defeating a militaristic enemy intent on subjugating the Continent.

The opposite is true today. Without properly formed strategy, our leaders seemed only too willing to go to war in Afghanistan, Iraq and Libya. Yet infected with political correctness, they often sought to blur the true purpose of military force by publicly postulating ideas such as spreading democracy, equal rights and reconstruction. Failing to resource their campaigns properly, or gain adequate public support when the going got tough, they preferred to precipitately withdraw forces irrespective of the consequences.

This approach, driven to an extent by a domestic media ingrained with self-doubt and often spinning to their own political agenda, has led to conflict where it is hard to discern winners or losers, victory or defeat.

Recent wars have shown that our young people remain willing to step up to the fight and to lay down their lives for their country and their comrades just as their forbears did in 1914. But the array of obstacles placed in their way is expanding and will further intensify as we leave Afghanistan.

If we are to retain this vital spirit of duty and sacrifice, we need to resist further erosion of our patriotic ethos and harness the strength of feeling among the British public that has been so movingly demonstrated in recent weeks at the Tower of London.