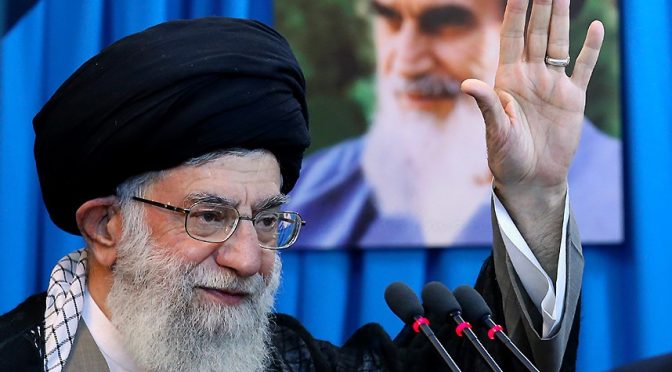 Kemp was involved in a creation of a recent report on the subject entitled Hezbollah’s Terror Army: How to Prevent a Third Lebanon War.

‘I think President Obama made some very, very fundamental errors in his foreign policy, one of which was to seek to encourage Iran to be the greatest power in the Middle East,’ said Kemp. ‘Essentially, he abandoned other US allies in the region – including Saudi Arabia, other Gulf states, and to an extent Israel – in favour of Iran.

‘The problem with Iran, of course, not only does it threaten many, many states in the region, particularly in relation to its Shia – of course, Iran is a Shia state and it really opposes most of the other states which are Sunni states,’ he continued.

‘I think above all we shouldn’t forget that the Iranian revolution was founded to a very large extent on anti-Americanism,’ he warned. ‘They hate America. They always have hated America. It’s what the revolution was all about, to a large extent. They always will hate America, and we shouldn’t forget that Iran, through its proxies such as Hezbollah, which this report is about, has attacked the United States and United States forces time and time again, including in recent history.

‘They are, without a doubt, the enemies of the United States, which President Obama was doing what he could to encourage. They are the greatest threat, I believe, to world peace today. Above all, that threat comes from the prospect that they will gain nuclear weapons and become a nuclear-armed state, which was effectively enabled by the P5+1 treaty that was led, of course, by that very same President Obama,’ said Kemp.

Kassam noted that the report predicts that a major war in the Middle East is ‘likely, and would be detrimental not just to Israel, but to the US too.’

‘In the same way as Iran hates and is fundamentally opposed to the United States of America, it’s also dedicated to the destruction of the state of Israel,’ Kemp noted. ‘We have seen Iran, in its proxy Hezbollah and particularly in northern Lebanon, we’ve seen Iran attack Israel. We’ve seen it build up its forces against Israel in southern Lebanon. We’ve also seen Iran through its Hezbollah proxy and other proxies both fund and incite Islamic terrorists elsewhere, such as in the West Bank and in Gaza, incite attacks on Israel.’

‘Some of them are long-range missiles,’ he said. ‘They have the capability to reach the furthest extremes in the south of Israel. They’re there, they’re waiting to be used, they’re ready to be used, and at some point, Iran will trigger their use. The reason we’re saying it’s imminent is because as the situation in Syria begins to stabilize, thanks to Iran essentially working together with Russia to keep Assad in power – that’s beginning to stabilize to an extent, and when that happens I think Hezbollah in Lebanon, which has been fighting also in Syria, will be ready to carry out its next offensive, which is going to be against Israel.’

‘The other problem, the other reason we’re saying it’s potentially imminent, is because it could happen as a result of a miscalculation,’ he added. ‘It could be some relatively minor clash between Israel and Hezbollah, either in Syria or in Lebanon, which could then escalate – maybe unintentionally – into an all-out war, which is what we saw in the second Lebanon war back in 2006.

‘Fortunately, the Trump administration is much more focused on making a stand against Iranian imperial aggression than the Obama administration was,’ said Kemp. ‘I think they’re already, to an extent, on the right page on this. I think President Trump and his advisers do recognize that Hezbollah presents a very real threat, not just to Israel but to the United States.

‘Let’s not forget – I’m talking slightly historically here, but it does indicate the thinking of Hezbollah and Iran – that in 1983, Hezbollah murdered 241 US soldiers in one attack in Beirut, as well as 58 French peacekeepers on the same day, in suicide bomb attacks ordered by Iran, conducted by Hezbollah. That was the single greatest, most deadly death toll for the United States Marine Corps since the battle of Iwo Jima in the Second World War,’ he recalled.

‘More recently, during the Iraq and Afghan campaigns, Iran through its proxies again – including Hezbollah – killed well over a thousand US servicemen in those campaigns,’ he continued. ‘People don’t often think about that. They think about al-Qaeda, or they think about Sunni and Shia extremists doing it, but actually over a thousand Americans were killed on the direction of Iran in Afghanistan and Iraq. There’s no doubt they are the enemy. America and President Trump, I think, must bear this in mind when he looks at what their activities are.’

Kemp pointed out that Israel is being targeted by Hezbollah partly because it is a key US ally in the region.

‘What America needs to do is find a way of preventing Hezbollah from continuing to build up that arsenal in southern Lebanon, and if possible to find a way of having it dismantled, and deterring them from using what they’ve got,’ he advised.

‘Now, that’s easier said than done,’ he conceded. ‘I think one thing that would be useful for Hezbollah and Iran to understand is that if there is a war, if they do attack Israel from southern Lebanon, then it won’t just be Israel that retaliates against Hezbollah, it will also be the United States. I would very much like to see US and British – being a Brit myself – I would very much like to see US warplanes flying alongside Israeli Defense Force aircraft in counterattacking. Because as I say, Hezbollah is not just against Israel, they’re against all of us as well.’

Kemp judged that European governments, including his own United Kingdom, ‘on the whole are extremely weak when it comes to standing up for themselves.

‘They were horrified when President Trump made his speech earlier this month about the Iranian nuclear deal and Iran’s general misbehaviour in the region,’ he elaborated. ‘They were horrified because all they want to do – Europe has got, I’m ashamed to say Britain as well in many ways, a long track record of appeasement. What they want to do is appease Iran. They want to trade with Iran. They don’t care what Iran’s doing on margin. They just want to trade with Iran and make financial gain as a result of that.’

‘I think above all, these days European governments see war as the worst possible of all options. Now, I know it’s a horrific thing, having taken part in a number of wars myself. I know how dreadful it is for the victims of it in particular. But sometimes we have no choice, as we had no choice in the Second World War, confronting the genocidal Nazi regime. It would be preferable – awful as it is to say – to fight Iran rather than allow Iran to continue to advance across the region, and eventually become a nuclear-armed state,’ he proposed.

‘I think it’s that one issue above all that we do need to be prepared to go to war over if necessary if we can’t find another way around it. Let’s not forget, Iran is not just developing its own nuclear weapons. It’s also, it will be ready to equip, in my opinion, terrorist groups with nuclear capability, which is the greatest fear I think any of us in the West have,’ said Kemp.

‘Also, Iran is engaged and involved, and has been for years, in a cooperation with North Korea in its own nuclear program,’ he added. ‘President Obama provided Iran with vast sums of money, which had been frozen assets, which have enabled them to help fund the North Korean nuclear program to an extent, and also obviously to help fund their own nuclear program, as well as their own attacks in countries, ranging from Yemen against Saudi Arabia through to Lebanon against Israel, into Syria – and in Iraq of course, where they’re gaining increasing dominance. This is a massive threat which has to be dealt with.’