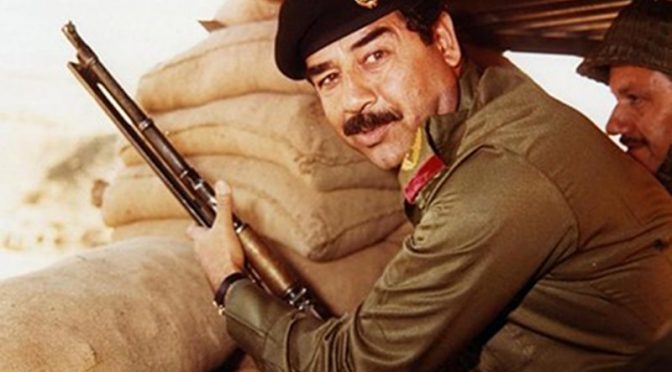 The invasion of Iraq and removal of Saddam’s regime were necessary to protect the lives of our people who were under the greatest threat since the Second World War.

Islamic terrorists butchered 3,000 people on 9/11, more than were killed by the Japanese at Pearl Harbor.

This included 67 Britons, more than had died in any single terrorist attack before.

The decision by George W. Bush and Tony Blair to attack Iraq was not cowardly, it was not criminal, it was not for revenge and it was not to steal Iraq’s oil – all smears put about by the anti-war lobby who would rather see our countries go under than take military action to defend ourselves.

It was a courageous act by both leaders in an unprecedented situation, far less clear-cut than any previous conflict.

9/11 had brought in a new era with Islamic terror gangs ready to massacre as many people as possible without restraint.

Saddam was not responsible for 9/11 but he was a mass-murderer and long-term supporter of terrorism.

He had links to Al Qaida that could easily have turned into full-scale cooperation.

Bush and Blair had every reason to be concerned that this new, unrestrained terrorism, directly supported by a state with all its resources, presented a serious threat.

A threat made far worse by the assessment that Saddam had weapons of mass destruction that could have been transferred to Al Qaida.

We should not forget that this was also the assessment of all the major intelligence services in the West.

I was working for the Joint Intelligence Committee in the Cabinet Office in 2003, although not on Iraq or WMD.

I had access to intelligence relating to the decision to invade, and close insight into the thought processes of our leaders.

I believed then and I believe now that the decision was the right one.

The violence and chaos following the invasion led to huge numbers of deaths caused mainly by Islamic terrorists.

Much of this slaughter could well have been prevented by more effective post-war planning. This was the real failure of leadership in the Iraq intervention.

But those who say that the situation in Iraq would have been better today had we not invaded, and had Saddam remained in place, cannot possibly know.

Aside from Saddam’s own wholesale butchery and oppression of his people, how would Iraq have fared under the Arab Spring?

The UN estimates around 400,000 have died in the Syrian civil war in the last 5 years, with no end in sight.

The Iraq Body Count, which records all confirmed deaths in Iraq, estimates around 250,000 have died there in the last 13 years.

Both figures are horrendous. But Iraq has a much larger population, and it is quite possible that without the Allied invasion that country’s suffering would have been far worse.