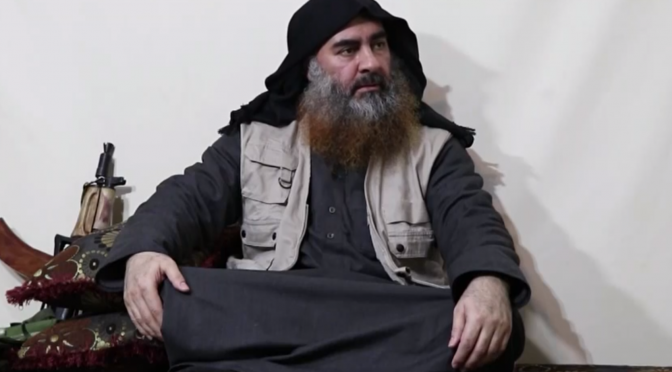 Some experts claim the death of Abu Bakr al-Baghdadi is only a symbolic success against the Islamic State. That’s wrong. It’s a major blow to IS and Islamic jihadists around the world, at least as important as the killing of his former leader Osama Bin Laden in 2011.

Al-Baghdadi was a hugely influential and inspirational figure for radical Muslims everywhere, his claim to be directly descended from the prophet Muhammad’s grandson widely accepted. A Koranic scholar at the University of Baghdad, he had a religious authority that armed his followers to counter claims that IS was a distortion of Islam.

Al-Baghdadi had been on the run and his Islamic State in retreat for many months following intensive coalition attacks against them. His death signals their final defeat but only in its current form. It does not mean the end of al-Baghdadi’s brutal vision any more than Bin Laden’s death was the end of Al Qaida, which has since increased its strength in various parts of the world.

Two months ago he named his successor but experience shows that terrorist groups evolve like the hydra, sprouting multiple heads, with subordinate leaders freed to carry out their own malevolent and sometimes more effective plans. Al-Baghdadi himself gained power after the killing of his former boss Abu Musab al-Zarqawi, leader of Islamic State in Iraq.

As well as the Middle East, around the world from Afghanistan to the US and from the Philippines to Europe, many of those he led and inspired remain active. More than 50,000 jihadists flocked from 80 countries to join IS in Syria and Iraq. Many times that have joined the cause in their own countries, inspired by IS’s skilled social media campaign, with orders to attack where they are using whatever weapons are to hand.

Some have been killed or imprisoned. But those that remain at large, or are eventually released, will go on to lead, conduct attacks and recruit future generations. That includes multiple jihadist networks in the UK and Europe. Hundreds of IS fighters have returned here and today, taking advantage of a weak justice system unable to find an answer to this pernicious phenomenon, freely walk our streets. Those who indulged in al-Baghdadi’s orgy of mass murder, rape and torture have tasted blood, learnt the tools of their vicious trade and received orders in al-Baghdadi’s words to ‘erupt volcanoes of jihad’ across the world.

We witnessed the consequences in the slaughter at London Bridge and the Manchester Arena as well as suicide, vehicle, knife and gun attacks in Berlin, Paris, Florida, California and many other places.

We can learn many lessons from al-Baghdadi’s reign of terror, including the need to immediately and decisively strike jihadist groups wherever they raise their heads. Equally pressing here in the UK is finding a way to deal with IS returners and supporters including those who are captured. Al-Baghdadi himself spent a period in US detention in 2004, before being released as only a low-level threat and in his final audio message two months ago, called on his followers to free IS prisoners including jihadist brides like Shamima Begum.

When Bin Laden was killed al-Baghdadi himself unleashed violent retaliation, slaughtering hundreds in Iraq. Security services will now be braced for attempts to avenge his death against soft targets wherever IS has a presence.