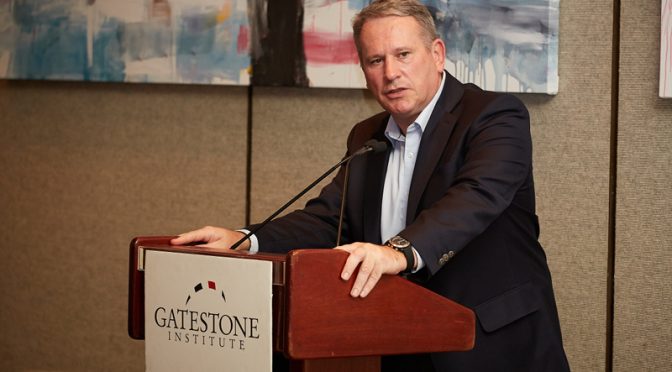 Article published by The Algemeiner, 13 April 2016.

Asked about the case of the IDF soldier currently under investigation for killing a subdued Palestinian terrorist who had just committed a stabbing attack against a comrade-in-arms, Colonel Richard Kemp – once the commander of UK forces in Afghanistan — said, “All people make mistakes, and soldiers are no exception, particularly since they are under immense pressure, may suffer from a lack of sleep, physical discomfort and often great fear.” The only relevant question, he added, is how an army and a country respond to violations, when they are determined as such.

Addressing the Gatestone Institute — a New York-based think tank specializing in strategy and defence issues — Kemp told The Algemeiner that the immediate public condemnation of the soldier in question by Israeli Defense Minister Moshe Ya’alon and IDF Chief of General Staff Gadi Eizenkot before all the facts of the case had even been established, was a function of their awareness of the “continual and unjust international pressure on Israel, no matter what it does.”

If the Israeli establishment had not reacted that way, said Kemp, author of the best-selling book Attack State Red, “it would have come under political assault.”

This attitude towards Israel, said Kemp, “is damaging to the West as a whole, because it constrains every army of every democracy; others do whatever they want. The perfect example of this is the war on ISIS. Though killing innocent civilians is obviously something we must avoid doing as much as we possibly can, our enemies hide among the civilian population, and sometimes we must risk the lives of civilians in order to destroy the enemy. Fear of doing this means that we will always lose.”

Kemp recounted his experience of the previous day, when he spoke at a pro-Israel event at New York University, held to counter “Israeli Apartheid Week” taking place there at the same time.

Kemp reiterated his long-standing position, based on in-depth research and numerous visits to Israel, that the IDF possesses a “unique morality” unparalleled in other militaries, where preventing civilian casualties is concerned. In addition, he said, unlike the case of other armies, “when Israel fights, it stands in isolation.”

A member of the High Level Military Group (HLMG) – comprised of top-level defense experts from Germany, Colombia, India, Spain, Australia, the US, France, the UK and Italy, which was established in early 2015 with a mandate by the Friends of Israel Initiative to examine the Gaza war – Kemp said the report it published in October will serve as a document to defend Israel in the “lawfare battle” being waged against it in the international arena. He said HLMG’s next project is to focus on “what Israel has to do to combat crazed Islamist extremists stabbing people in the streets and ramming into them with their cars.”

However, he stressed, “I don’t believe there can be a resolution to the Israeli-Palestinian conflict. Israel wants to live in peace, but what the Arabs want is its annihilation.” Kemp, a Catholic, nevertheless expressed optimism about the Jewish state’s remaining “an outpost of strength,” adding that Israel “should initiate an offensive strike on Iran, whose nuclear program it has the capability of delaying.”

This was in sharp contrast to his assessment of Europe, which is said is “on a spiral downward to being obliterated.”