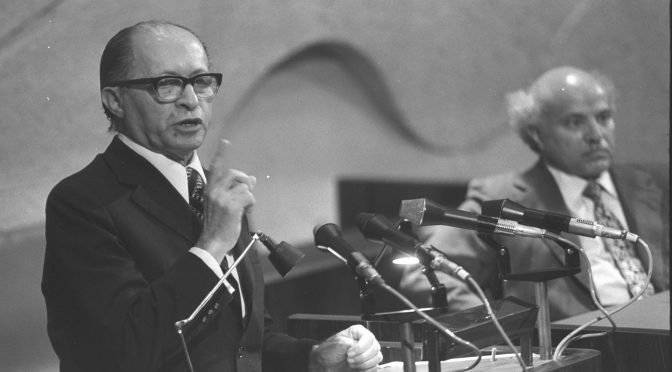 “What kind of talk is this, ‘punishing Israel?’ Are we a vassal state of yours? Are we a banana republic? Are we 14-year-olds who, if we misbehave, get our wrists slapped? Let me tell you whom this Cabinet comprises. It is composed of people whose lives were marked by resistance, fighting and suffering.”

These were the words of Prime Minister Menachem Begin delivered to the U.S. President Ronald Reagan in December 1981. Begin, one of the greatest leaders and fighters of our times, knew the meaning of true independence.

He knew that it was not about firecrackers, dancing in the streets or lighting flames. It was about standing up for yourself and submitting to no man. Declaring to the world, “this is where we stand.”

Israel’s independence was bought at a high price in Jewish blood, fighting first against the might of the British Empire and then against five powerful Arab armies which sought its destruction.

For 68 years Israelis have fought again and again to defend their independence against enemies who would subjugate their country. No other nation has struggled so long and so hard, surrounded by such unyielding hostility.

But in making their stand, Israelis have never had to stand alone. From the beginning, Jews from the U.K., the U.S., Europe, Australia, South Africa and around the world rallied to the fight for independence under the glorious banner of the Mahal. Among them were non-Jews, including a Christian soldier from my own regiment.

In the years since, and even today, the courage of their young successors, the “lone soldiers”’ of the diaspora, travelling thousands of miles from the safety of their homes to stand and fight here to preserve Israel’s independence, inspires awe and humility. As Begin said: “This is the land of their forefathers, and they have a right and a duty to support it.”

Israel’s independence has a strength that cannot be known by those who have not had to struggle for their freedom. What is the meaning of this independence?

It means that Israel’s right to exist is not to be sanctioned by the peoples of the Middle East or by the leaders of the Western world. It is to be determined only by the Jewish people who, down the millennia, have fought, suffered and died for that inalienable right.

The civilized world has an obligation to respect this independence just as it respects the independence of other free, democratic nations.

Israel has shown mankind how a besieged nation — against all odds — can survive and flourish, decide its own destiny and unwaveringly retain its honour, its decency, its dignity, its integrity and its compassion. It was not for nothing that British Premier Winston Churchill described the Jewish people as “beyond any question, the most formidable and most remarkable race which has appeared in the world.”

Today not just Israel but the whole of civilization should celebrate the independence of the nation that continues to shine a beacon light onto that world.