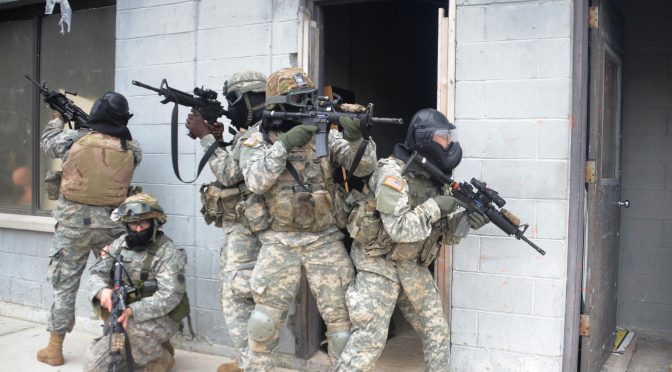 Following the brutal killing of George Floyd, demonstrations and peaceful protests have taken place throughout the United States in a legitimate expression of deep grievances and suffering felt by members of black Americans and those who stand in solidarity with their cause.

Separate to those, gangs of violent, thuggish, rioting looters and agitators are now engaged in a rash of dangerous, criminal behavior spreading throughout America.

As a result, the security role of the National Guard, originally confined during the COVID-19 era to ‘support for warehouse and commodity management and distribution,’ ‘conducting logistics missions in support of the state response at warehouse locations’ and ‘advising and assisting, logistics, transportation, traffic control’ is now very likely to become vital, central and extremely complex—deployed as they will be to not only disperse those gangs, but also to protect the business owners and homeowners threatened by these violent mobs.

As veterans of the Israel Defense Forces, the United States Navy and the British Army, respectively, we are well aware of the complexities regarding the implementation of the use of force for the sake of crowd control, across a range of missions; from dispersal to anti-terror measures.

We understand the complexities of a military deploying and operating among and alongside a host nation’s citizenry against threats emanating from non-citizens. While conducting those operations, we found that the greatest asset to hand was a population of willing supporters—people who saw us not as occupiers or tyrants, but as colleagues, partners and even family.

Those operations were not nearly as complex or as fraught an undertaking as the deployment of what is essentially a military, to restrain its own citizenry. The British Army conducted such operations in Northern Ireland beginning in the late 1960s, and their actions are still being fought out in the courts half a century later.

Yet that very task could soon become the priority of the Guard.

It is a delicate mission.

Boundaries between residential areas and districts are non-existent. If the looting and violence continues, these riots are liable to spread to municipalities, towns and villages upstream from where they are currently taking place. Absent territorial enforcement, there is little reason to expect a slowing of the geographical spread of these events.

In a polarized America, uniformed law enforcement has often proven to be an incendiary presence; the very thing needed to ignite a storm of civil unrest, even as it comes in service of the citizenry. In the wake of the horrific videos of a uniformed officer denying the circulation of blood and oxygen to the brain of a detained, handcuffed, black American, members of that community will be further incensed by the increased appearance of uniformed personnel—whether that uniform is one worn by the police or a National Guardsman.

If the Guard is charged with restricting the movement of populations between areas, or dispersing those who seek to assemble, both of which are essentially law enforcement roles, the means of enforcement are inherently problematic.

First, the use of non-lethal methods results in unintended lethal outcomes across a long enough timeline. Asphyxiation, a rubber bullet that impacts upon the temple instead of the leg or abdomen, a rushing crowd that tramples an individual to death—all of these realities exist.

Second, and of even greater concern, is what can occur if the restricted population senses that those sent as enforcers are unwilling to carry out their task because of concern over the aforementioned outcomes. Examples of such a dynamic are already taking place in Minneapolis, where police recently fled the scene of a riot.

Third, the National Guard’s raison d’être is not policing a domestic populace. Striking the requisite balance of security enforcement and engagement with the citizenry will be a tremendous challenge, undertaken beneath an intensive media glare.

Sustained, district-wide riots and mob violence could serve as the gasoline poured onto the domestic fire currently fueled by the combination of coronavirus pandemic, political division and socioeconomic inequality.

Upping the ante here is the fact that due to the COVID-19 pandemic, millions of young Americans, particularly men aged 18-35, are currently out of work, unengaged, restless and have little to no commitments preventing them from joining these riots. The added financial insecurity attendant the shelter in place orders that are still in effect, not only serve to further stir the impulse to steal and to loot—which is clearly unacceptable—but also increases the availability of bodies for the purpose of protest and potentially cause, and be the victims of, harm. The result could be reigniting a cycle of violence and further rioting with each passing incident.

The unrest that could occur in the coming days and weeks may well be met with a police and National Guard presence that most Americans have never seen before. The societal tensions in the U.S. could well be exacerbated by an increased domestic military/law enforcement presence. And the headlines that emanate from the scene will make for troubling viewing. A tear gas canister fired toward a crowd for the sake of dispersal in order to avoid death does not constitute a headline; but a child trampled during the course of that dispersal very much does. Such can be the unintended outcome of massive Guard deployment.

And yet, without the safety provided by the Guard, the anarchy and violence that could occur in its absence would surely make for even more troubling images, headlines, videos, tweets and posts.

In order to succeed, it is essential that the Guard and the American citizenry receive strong, moral and clear leadership from elected officials and community leaders at the local, state and federal levels throughout their deployment. As Guardsmen are sent forward to confront this coming crisis, the National Guard may become the savior America needs, even if not the one she wants.

But its task is not a simple one.

Colonel Richard Kemp, former commander of British forces in Afghanistan, was a member of the UK’s national crisis management committee, COBRA and commanded British troops in the Balkans, Afghanistan, Iraq and elsewhere, often working alongside U.S. forces. He completed eight tours of duty in Northern Ireland dealing with riot control, counter-terrorism and intelligence.

Benjamin Anthony is an Israel Defense Forces veteran and the co-founder & CEO of The MirYam Institute. He served in the Second Lebanon War of 2006, Operation Pillar of Defense of 2012 and Operation Protective Edge of 2014. He has served in Judea and Samaria and along Israel’s northern border.

Cade Spivey is a publishing adjunct at The MirYam Institute. He is a graduate of the United States Naval Academy and served three tours in the Navy as a gunnery/anti-terrorism officer, damage control assistant and counter-piracy evaluator. He is currently a student at the Wake Forest University School of Law.