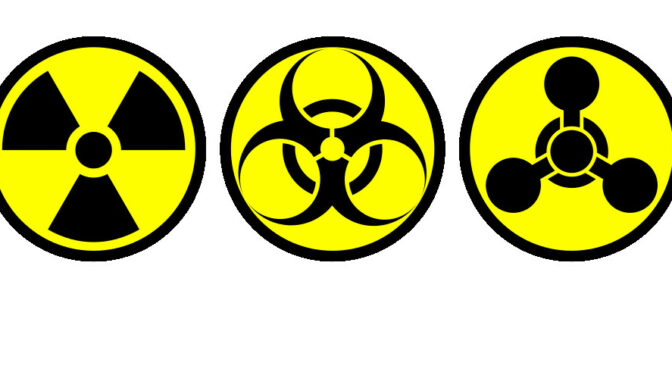 Allegations by Ukrainian forces that Russia launched a chemical attack on soldiers and civilians in Mariupol on Monday are under investigation. If it is confirmed, how will Nato react?

President Biden has declared chemical weapons a red line. He said in March: ‘It would trigger a response in kind’. British Armed Forces Minister James Heappey said yesterday that any use of chemical weapons by Russia in its attacks on Ukraine ‘will get a response and all options are on the table’.

Are all options really on the table, including a military option? Perhaps a strike against Russia’s drone or rocket forces responsible for a chemical attack, or even known chemical weapons plants or stockpiles inside Russia? It may be that such an attack would be unlikely to trigger the nuclear reaction that Putin likes to threaten and which has cowed Nato. But it is likely that Moscow would retaliate by a counter strike against Nato forces in Europe, triggering an escalation potentially leading to world war.

If that was actually in the thinking of Nato’s leadership then by now they should have ordered general mobilisation of their forces, especially air forces, and fully-loaded aircraft carriers should already be at sea.

The reality is that Biden and other Nato leaders have made clear that they will not intervene militarily in the war in Ukraine, and nothing they have said about chemical weapons suggests this particular war crime would be an exception. In their vague talk about responses all have been careful to avoid any suggestion that crossing this red line could lead to a military strike.

They remember Obama’s red line in 2012 when he said unequivocally that chemical weapons use by Assad would trigger direct US military intervention. The following year, when Assad killed around 1,400 civilians with sarin gas filled rockets, he failed to act. That was against a state in civil war that had no capability to retaliate against the west. Then, Putin saved Obama’s bacon by agreeing to ‘disarm’ Syria of its chemical weapons stockpiles. That allowed Obama, his Vice President Joe Biden and deputy national security adviser, now Secretary of State Antony Blinken, to claim their weakness was in fact a diplomatic victory. It also emboldened Putin in Syria and around the world and played its part in what we are watching unfold in Ukraine today.

In 2017 and 2018 Donald Trump did make good on Obama’s red line, launching air and missile strikes following Assad’s further use of the very chemical stockpiles that Obama and Blinken said he’d given up. But that is irrelevant when it comes to deterring Putin who sees Biden as an Obama not a Trump. The weakness inherent in Nato effectively ruling out military action in any circumstances – including chemical attack – gives Putin a blank cheque that he will be cashing in as the next phase of his offensive in Ukraine opens up.

Biden and our own leaders better have some effective alternative to a military response if chemical weapons have been used in Ukraine or are in the future. The minimum would be total and immediate sanctions on trade and economic activity involving Russia including gas and oil by all Nato countries as well as a Nato-wide declaration that normal relations with Russia cannot be restored while Putin retains any role in its affairs. It is hard to see Germany or France signing up to anything like that. But if the western world no longer has the courage to police the rules-based order that it introduced, even in such egregious circumstances as a chemical weapons attack, Ukraine is going to be the beginning of the end of the peace and prosperity that so many have had the courage to fight for in the past.