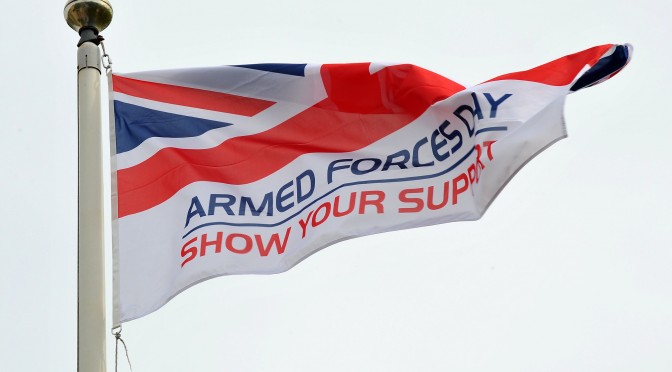 As a former soldier and taxpayer, I was deeply embarrassed when I visited barracks and found soldiers living in slum conditions

WHEN 1,200 soldiers, sailors and airmen march past the Earl of Wessex in Plymouth today they will represent all of the men and women who have served on land, at sea and in the skies around the world, protecting our country.

Off the shores of this historic naval port, at 2pm, one of our most powerful warships, HMS Argyll, will fire a 21-gun salute.

At fly-pasts, parades and ceremonies in towns and cities across the UK, we will commemorate the service so honourably given by our brave fighting troops.

Today the armed forces are held in greater esteem by British people than at any time since the Second World War.

This is not because of the glitter of ceremonial uniforms, the crash of
saluting guns or the roar of planes flashing by in tight formation.
It is because of soldiers like 19-year-old Private Curtis Thompson, who is today fighting in Afghanistan with the 1st Royal Anglians, the battalion I once commanded.

Little more than a boy, he is “Point Man”, the most dangerous job in the world, leading his comrades across a deadly bomb-riddled desert where one false move could detonate a blast which would blow off your legs.

His words sum up the heroism and comradeship so common among our forces: “I’m not worried about myself, but most of the blokes have wives and girlfriends and if I miss something it may not be me that stands on it.”

It is because of breathtaking bravery and ice-cold professionalism such as that shown by SAS troopers who earlier this month risked their lives storming in to rescue British aid worker Helen Thompson, held hostage deep in Taliban territory.

It is because of the spine-tingling courage of our wounded, exemplified by Lance Bombardier Ben Parkinson, the most severely injured soldier to survive the fighting in Afghanistan, who battled against pain and exhaustion to carry the Olympic torch past the cenotaph at his home town of Doncaster this week.

He should be a hero to every man and woman in this country.

And it is because of the sacrifice of men like Corporal Alex Guy, also from my regiment, the last British soldier killed in Afghanistan.

It would be impossible for any citizen to make a greater contribution than Cpl Guy. He gave up everything he ever had and would ever have, including his courageous wife Emma, who I had the honour to meet last week when we welcomed his body home at RAF Brize Norton.

Our political leaders will today bask in the reflected glory of men and
women like these – representatives of the finest and most dependable institution left in this country.

They should ask themselves whether the support they so publicly show on Armed Forces Day is backed up on every other day by the absolute commitment needed and deserved by our troops on patrol in Afghanistan, their comrades back home and those who have served.

The Defence Secretary is proud he has balanced the MoD budget. At what cost to servicemen and women?

As a former soldier and taxpayer, I was deeply embarrassed when I visited my battalion in their Pirbright barracks and found them living in slum conditions.

The House of Commons Defence Select Committee this week warned the MoD that two thirds of soldiers’ barracks accommodation is unsatisfactory, yet the money men have brought planned upgrades to a halt for three years.

Such shocking disregard for soldiers’ welfare is corrosive to morale, with troops often claiming their austere forward bases in Helmand afford better conditions than their barracks back home.

Also devastating to the morale of those who are prepared to give so much are the progressive reductions in allowances and the attack on forces pensions, which significantly hit their living standards.

This has led to many experienced soldiers with critical combat skills voting with their feet to the detriment of our forces’ fighting capability.

There can be no higher priority for Government welfare spending than looking after our wounded soldiers and their families, and the families of those killed in action.

Including Cpl Guy, 598 British troops have been killed in Iraq and
Afghanistan. The government guards closely the figures for those wounded in action, but according to the British Limbless Ex Servicemen’s Association, 282 of our fighting men and women have lost arms, legs and eyesight. This includes 80 double leg amputees and 16 triple amputees.

Hundreds of others have serious life-changing wounds such as burns,
deafness and loss or damage to internal organs. These heroes, whose
sacrifices are so great, must be looked after forever.

It is the nation’s absolute responsibility, and while charitable aid is
welcome, the government must be ready to spend every penny that is
necessary to ensure that they and their families can lead as rewarding and comfortable lives as possible.

The same is true of the unseen wounds. It should be no surprise that
combat, whether or not a soldier is injured, often exacts a harsh price.
Close proximity to explosions, witnessing a comrade who is closer than a brother ripped apart or horrifically burnt, or treating dreadfully wounded children – common experiences for fighting troops – all take their toll.

Some reports say a quarter of veterans suffer from post traumatic stress disorder, causing nightmares, flashbacks, depression, anxiety and other crippling afflictions which can tear a family apart, explode into domestic violence or even be a trigger for suicide.

Probation staff figures have shown a shocking one in 10 prisoners in this country are ex-servicemen. The offences that have led many of them to be locked up will undoubtedly be the result of their military service, including PTSD.

These hidden wounds can take many years to come to light. That those still serving should be given the best available treatment and welfare support is blatantly obvious.

The government must also go much further in ensuring ex-servicemen who suffer as a result of their service also receive the highest priority treatment and support.

All of this is, of course, very costly. But if the sentiments which underpin Armed Forces Day are to have any meaning we should demand that our government gives proper support to those who give so much to protect us.

Colonel Richard Kemp led the Daily Mirror campaign for the introduction of the Elizabeth Cross.