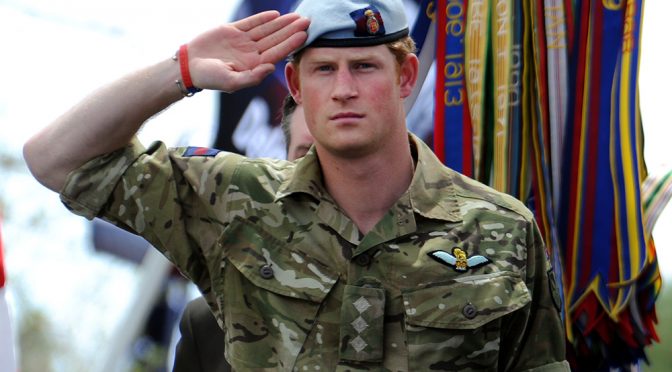 Prince Harry earned huge respect among the Armed Forces for his 10 years of military service. One of the most privileged men in the land, there were many people who did not want him to put his life on the line in the battle zone of Afghanistan where so many British troops were killed and maimed. Unlike most soldiers, he had to personally fight the system to get himself into action. But in the face of opposition from a government worried by the risk to national prestige if he was killed, wounded or captured, he eventually arrived in Afghanistan ‘with butterflies in my stomach’.

Soldiers who served alongside him during his two tours in Afghanistan, on the ground and in the air, have spoken of Harry’s leadership and courage, of his down-to earth approach to ordinary soldiers and of his devotion to his comrades in arms. That devotion extended beyond his direct military service. He played a major role in looking after the war wounded and took part in a gruelling 200-mile trek to the South Pole in December 2013 to raise awareness for the charity Walking with the Wounded.

Most notably he set up and led the Invictus Games, which have been so important for restoring confidence, morale and self-respect among some of the most horrifically wounded of our troops as well as allied forces. I know several participants in the Games, all of whom met and were inspired by Prince Harry and the extent to which he cared for them personally. In his words, the games ‘have shone a spotlight on the “unconquerable” character of servicemen and women’.

Although it is gratifying to learn that he will keep up his role with Invictus, he is stepping down from his ceremonial appointments in the Armed Forces, including Captain General of the Royal Marines. This is a great shame. His own military credentials have done so much for the prestige of the Armed Forces as a whole and especially the units he has been personally associated with.

Prince Harry’s relinquishment of military appointments will be most keenly felt by senior officers, whose association with royal figureheads is inevitably the greatest. Rank and file soldiers might share some disappointment but it will make little real difference to them. His active service, and through it his unique ability to connect with those who served, will not be forgotten. And soldiers are above all realists who understand that words quoted by Harry from the poem Invictus apply equally to a Royal Prince as to themselves: “I am the master of my fate, I am the captain of my soul”.