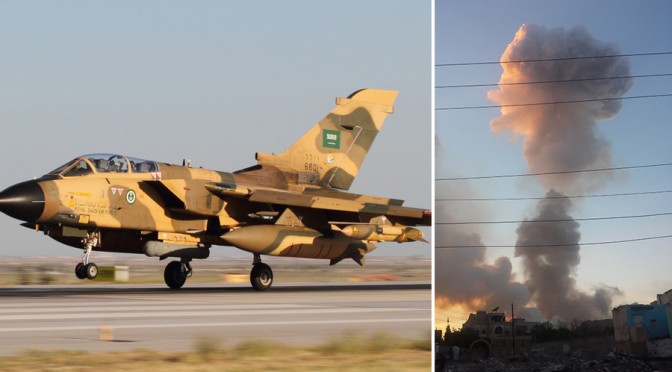 by Richard Kemp and Jasper Reid

The United Nations, Amnesty International and other groups have accused the Saudi-led coalition of war crimes in Yemen. A leaked UN report claims the bombing campaign against Iranian-supported Houthi insurgents seeking violently to topple the legitimate government of Yemen has conducted deliberate, widespread and systematic attacks on civilian targets.

If the UN’s assertion is true, and the coalition is deliberately and disproportionately killing thousands of innocent civilians, it is a war crime. But it is unlikely to be true. The UN has produced no actual evidence of war crimes. None of their allegations is based on investigation on the ground. Their experts have not been to Yemen, depending instead on hearsay evidence and analysis of photographs.

The UN has a pattern of unsubstantiated allegations of war crimes against the armed forces of sovereign states. Only last year, without any military expertise, and never having visited Gaza, a UN commission convicted the Israel Defense Force of deliberately targeting innocent Palestinian civilians in the 2014 conflict. It was an assessment roundly rejected by America’s most senior military officer, General Martin Dempsey, the Chairman of the Joint Chiefs of Staff.

Dempsey’s own findings were confirmed by an independent commission of experienced senior military officers and officials from nine countries. The High Level Military Group found that Israel had not committed war crimes, but had in fact set a bar for avoiding civilian casualties so high that other armed forces would struggle to reach it.

Moreover, last September the UN said that a US airstrike against a hospital in Kunduz, Afghanistan, was “inexcusable” and “possibly a war crime.” Few military forces in the world take greater precautions to prevent civilian casualties on the battlefield than the US. Anyone who has actually experienced combat knows that while such incidents are tragic, when carried out by Western forces, they are far more likely to be the result of human error or the chaos of battle than deliberate war crimes.

There is every reason to believe that the UN is again crying wolf. There is no doubt that thousands are dying in Yemen in horrific circumstances. But we cannot just accept the UN’s figures and its attribution of the proportion of deaths being inflicted by the Saudi coalition. Most of the data comes from the Houthi insurgents, either directly or via non-governmental organizations (NGOs), and is simply accepted as fact. The Houthis have learned many lessons from Hamas and Palestinian Islamic Jihad in Gaza, groups also supported by Iran. Those lessons include the falsification and distortion of civilian casualty figures and their causes. The UN swallowed the fake Gaza figures hook, line and sinker, and are now making the same error in Yemen.

As with Israel’s defensive campaign in Gaza in 2014, and the continued U.S. military support to the Afghan regime, the Saudis’ war to defend the government of Yemen and curb Iranian aggression in the region is lawful and legitimate. Therefore, the illegality of civilian deaths must be assessed according to the laws of armed conflict, in particular whether adequate precautions were taken to avoid them, whether they were proportionate to the military objectives and whether they were necessary to achieve legitimate military goals. The UN cannot possibly make such judgements without a more far-reaching and thorough investigation, and especially not on the basis of information provided by Saudi Arabia’s enemies and by interpreting photographs.

Most of us do not like the way that the Saudi regime runs their country according to the strict application of Islamic Sharia law, and we abhor their record on human rights. But the Saudi military ethos is well known and understood by Western military leaders, including from the U.S. and UK, who have worked closely with them for many years. The reality is, as our officers currently serving alongside them will attest, that the Saudis and their allies are not deliberately trying to kill innocent civilians. Indeed, they are doing their best to minimize civilian casualties. The question is whether their best is good enough.

Saudi Arabia and its coalition allies have the most sophisticated Western combat equipment, including planes, attack helicopters, drones and precision-guided munitions. But they lack battle experience. The exception to this is the Emirati forces within the coalition. They have had many years of combat experience alongside Western militaries, including in Somalia, Kosovo, Libya and Afghanistan. Because of that, they have acquitted themselves in Yemen with great professionalism and effectiveness at sea, on the ground and in the air.

But the lack of experience of the other coalition members puts them many years behind our own forces in wielding the highly complex 21st century capabilities of intelligence, surveillance, reconnaissance, communication and targeting.

Yet the coalition faces the same tough challenges that we face on battlefields everywhere. Their Houthi adversaries fight according to the well-developed doctrine of their backers, the Iranian Quds Force. Like Hizballah, Hamas, the Taliban, Al Qaeda and the Islamic State, their techniques include deliberately killing civilians, fighting from within the population and forcing innocents to become human shields.

Completely ignoring the laws of war, they exploit their enemies’ adherence to them. They lure their opponents to attack and kill civilians. They exploit gullible or compliant reporters, international organizations and human rights groups to facilitate their propaganda, including false testimony and systematic fabrication of imagery. The aim is to instigate international condemnation in order to constrain their militarily superior enemies.

We have seen credible forensic analysis of strikes in Yemen that directly contradict the findings of the UN. Forensic analysis shows that rather than deliberately targeting civilians, the Saudis and their allies have taken remarkable steps to minimize civilian deaths. Of note, they have learned much from Israel’s conduct of operations in Gaza. This has included the use of guided munitions to conduct precision attacks against insurgents while seeking to reduce collateral damage.

Why would coalition forces spend vast amounts of money in a cripplingly expensive conflict firing precision strike munitions, and put their valuable pilots at risk, if they wanted to massacre civilians? Why not use much cheaper unguided munitions or Assad’s indiscriminate barrel-bombs?

The overwhelming majority of civilian deaths caused by the Saudi-led coalition have been due not to deliberate targeting, but to inexperienced pilots and unsophisticated intelligence and targeting capabilities in the face of an enemy that fights from within the civilian population. And to that the friction, confusion, stress and fog of war that leads even the most sophisticated, experienced and restrained military forces, such as American, British and Israeli, to sometimes kill civilians unintentionally. Contrary to the UN’s claim, this is unlikely to amount to war crimes.

Like every conflict in the Middle East, the war in Yemen is almost intractable, takes a heavy toll on innocent civilians, and is unlikely to end in anything approaching a perfect solution. But Saudi Arabia and its allies are making considerable efforts to restore stability to the country and its legitimate government.

Instability in Yemen undermines Western interests, including oil supplies. Instability also allows Al Qaeda and the Islamic State — proven and lethal threats to the US and the West — to flourish there.

By confronting the Houthis in Yemen, Saudi Arabia is also confronting Iran, which represents an even greater threat to the region and to the world. Emboldened by U.S. President Barack Obama’s nuclear deal, enriched by the release of billions of dollars of previously frozen funds, encouraged by the imminent boost in oil revenues, Iranian imperial aggression is today rampant in Iraq, Syria, Lebanon and Yemen.

However unpalatable to many, Saudi Arabia is and will remain a vital ally of the West. We must continue to support them in the fight in Yemen. We must not allow the false, ill-informed and increasingly shrill condemnations by the UN, human rights groups and the media to undermine Saudi’s fighting effectiveness as they have sought to do against other legitimate government forces fighting lawless insurgents in so many other places.