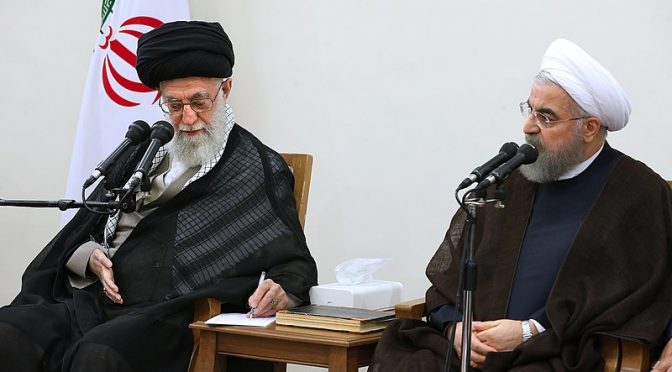 Last month the trial began in Belgium of Assadolah Assadi and three other Iranians accused of planning a bomb attack in Paris in 2018. Since 2015 Assadi had been the most senior officer of Iran’s Ministry of Intelligence and Security in Europe, at the time operating under diplomatic cover at the Iranian embassy in Vienna. He is the first Iranian government official to be tried by an EU country for terrorist offences, despite numerous attack attempts on EU soil ordered by Tehran.

State supported terrorism is not just an act in itself but also an instrument of national power and coercion. Together, these plots were a malevolent message and clear threat to Europe that unfortunately have been received and acted upon as intended in London, Berlin, Paris and Brussels.

Assadi’s failed plot was reportedly ordered by Iranian President Hassan Rouhani and approved by Supreme Leader Ali Khamenei. His target was a rally for the National Council of Resistance of Iran, with 80,000 supporters present and attended by former Canadian Prime Minister Stephen Harper, President Trump’s lawyer Rudy Giuliani and several British and European members of parliament. The explosives, allegedly brought into Europe from Iran by Assadi on a commercial flight, were TATP, the same type as was used to kill 22 and wound 800 in a jihadist attack at the Manchester Arena, UK, in 2017 and the London 7/7 bombings that killed 52 and wounded 700 in 2005. The message was clear. In March Assadi, who has refused to attend his own trial claiming diplomatic immunity, threatened retaliation if he is convicted. The Iranian government has also warned of a ‘proportionate response’ against countries involved in the trial.

Assadi’s bombing was prevented by European security authorities using intelligence provided by Israel. Mossad previously passed intelligence to the British security agency MI5 that enabled them to disrupt another Iranian-directed bomb plot in 2015. Terrorists linked to the Iranian proxy Hizballah had stockpiled three metric tons of ammonium nitrate in North London — the same explosive material that caused such devastation in Beirut earlier this year. The quantity in London was greater than the ammonium nitrate that killed 168 people, injured 680 and damaged hundreds of buildings in the 1995 Oklahoma City bombings.

The same year as the London attempt, another Hizballah bomb plot was uncovered in Cyprus, also an EU member, this time involving 8.2 metric tons of ammonium nitrate, and again revealed to Cypriot authorities by Mossad. There had also been an attempt in Thailand in 2012 and, two years after the London plot was uncovered, indications of a similar plan in New York. The same year as the Thailand plot, Hizballah murdered five Israeli tourists and a driver when they bombed a bus at Burgas in Bulgaria, another EU member state.

Iranian-organized terrorist attack plans were uncovered in Germany in 2017 and Denmark in 2018, both EU members, and also in 2018 in Albania, a formal candidate for accession to the EU. Two Dutch citizens of Iranian origin were assassinated in the Netherlands, another EU state, on orders from Tehran in 2015 and 2017.

The attacks in EU countries since 2015 have all occurred during the time when Britain, France, Germany and the EU were actively involved in the JCPOA, the Iranian nuclear deal with the P5+1. European reactions have been predictably limited, with many suspecting that the weak response was due to a desire to avoid endangering the JCPOA. Until exposed in 2019 by a Daily Telegraph investigation into Hizballah terrorist activity in Europe, British authorities kept the 2015 London bomb plot secret, apparently due to pressure from the Obama administration to suppress details, to avoid compromising the nuclear deal.

Despite, or maybe because of, such terrorist outrages against them, the EU states played along with Iran, refusing to follow the US in disavowing the nuclear deal, in part a response to Iranian regional aggression and sponsorship of international terrorism. Rather than joining President Trump’s ‘maximum pressure’ campaign to modify Iran’s behaviour, the Europeans supported Tehran and undermined the US, even seeking to subvert American economic sanctions by setting up a financial instrument, INSTEX, to allow continued trade with Iran. European governments also failed to oppose lifting UN conventional weapons sanctions against Iran this year and refused to support US snapback sanctions following Iran’s flagrant breaches of the nuclear deal.

Last year, the EU reluctantly imposed token financial sanctions on a section of the Iranian Ministry of Intelligence and Security and two officials after the terrorist plots in Paris and Denmark in 2018. Undermining their own actions and kowtowing to Tehran even while announcing these limited measures, EU officials made a point of emphasising their enduring support for the JCPOA and intent to continue trading with Iran. Since then EU leaders have vociferously protested the elimination of Qasem Soleimani, mastermind of Iran’s terrorist operations directed at them, and Mohsen Fakhrizadeh, nuclear scientist and Soleimani’s fellow general in the Islamic Revolutionary Guard Corps, a proscribed terrorist organization responsible for facilitating attacks in Europe.

Britain, Germany and especially France had severe reservations about the JCPOA during negotiations with Iran, especially over the sunset clauses that allowed expiry of provisions limiting Tehran’s access to nuclear material and advanced technology, and in reality paving a path to the bomb. They were railroaded into accepting the flawed deal, however, by President Obama’s determination to secure his legacy despite Iranian intransigence. Their failure to follow Washington out of the deal was due to misguided loyalty to Obama, contempt for President Trump and a desire to appease Iran, rather than genuine strategic calculation.

Now they find themselves locked into what they know is a phoney and highly dangerous nuclear agreement that simply consigns confrontation with a nuclear-armed Iran to future generations. Presumptive President-elect Biden and his prospective administration officials have made clear their intent to return to the deal, and Iran is desperate that they do so in order to relieve the existential pressure on its economy from current US sanctions and to clear the way for its nuclear breakout. Of course Tehran’s enthusiasm to resurrect the deal will be carefully disguised as the opposite while they push for even more favourable terms than last time.

Freed from their self-defeating scorn of Trump, there will soon be an opportunity for European governments finally to act in their own best interests, and those of their children, by persuading Biden only to accept a deal with Tehran that genuinely constrains the ayatollahs’ nuclear ambitions and curbs their regional aggression. First, however, they must confront their own fears of Iran.

Iran launched the numerous potentially devastating terrorist plots in Europe, at a critical stage for the nuclear deal and the survival of the Iranian regime, as a message directed at London, Paris, Berlin and Brussels. The targets were Iranian opposition figures. It was convenient to murder them to deter other dissidents and to warn Europe against harbouring or supporting them. But it wasn’t necessary, in particular given any risk of potential backlash from Europe. The leadership would not have done so had they in fact feared damaging retaliation.

The Iranian leadership ordered these attacks to show their supposed strength and directly to warn the Europeans of the dangers of defiance. They look at Europeans, as well as Americans, with contempt, as weak and decadent, lacking the courage or resolve to stick up for their own interests, as people they can trifle with, as they have done repeatedly in the past. President Trump gave them pause for thought, especially when he ordered the death of Qasem Soleimani, second in importance only to the Supreme Leader himself. They have higher hopes of Biden, whom they expect to be more supine.

We can be sure the Supreme Leader has rejoiced at the results of his message: cowering in Europe, with only weak and token response, accompanied by a desperate, pleading assurance that the targets of his aggression are still his friends. If ever there was a lesson that appeasement fails and strength succeeds, surely this is it. European governments must now show their own strength or face continued Iranian coercion – coercion that will be witnessed by malign actors around the world from Moscow to Beijing to Pyongyang, with obvious implications. That strategic imperative aside, can the Europeans really afford to allow such an egregiously hostile and manipulative regime as Tehran to acquire nuclear weapons?