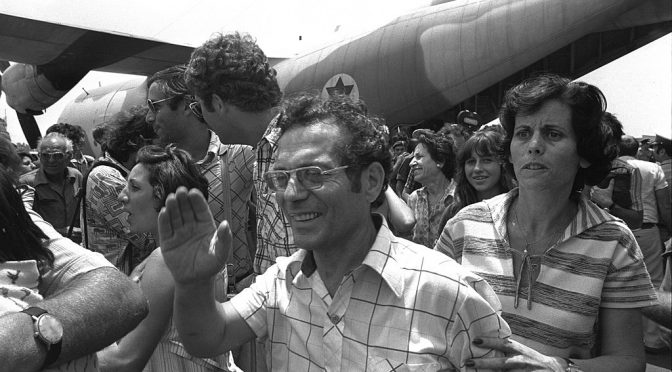 Are we no longer allowed heroes? The 2017 film Churchill is nothing less than a character assassination of the man who led Britain to victory in World War II. The movie 7 Days in Entebbe, released last week in Israel, gives similar treatment to the hero of the dramatic rescue, Lieutenant Colonel Yoni Netanyahu. The film is based on a book about the raid by the distinguished British historian Professor Saul David.

Incredibly, in an interview last week, David seemed to suggest that the German terrorists at Entebbe played a greater role than Netanyahu in saving the hostages’ lives. He claims they had second thoughts, deliberately sparing the hostages when they could have killed them.

Why? Because they had developed empathy for their captives and ‘it wouldn’t have looked good for Germans to kill Jews again, after the Holocaust’. Look good to whom? It doesn’t add up. They had seized Jewish hostages at gunpoint, conducted a ‘selection’ chillingly reminiscent of Auschwitz, and were members of a rabidly anti-Semitic terror group, the Revolutionary Cells.

Meanwhile, David dismisses Netanyahu, claiming his research shows he ‘was not a central figure in the planning of the operation’. Yet Netanyahu’s Sayeret Matkal comrades who were there describe him as ‘the father of the operation’, confirming that he did in fact plan the rescue in meticulous detail after being given orders by Brigadier General Dan Shomron, the overall commander, to take over the airport terminal and release the hostages.

In trying to second-guess Netanyahu’s actions at Entebbe, David shows that even the most assiduous academic cannot necessarily perceive the reality of close military combat. He says: ‘Ultimately, the operation succeeded thanks to luck more than anything else.’ This is blatantly wrong. But David should not be surprised that luck played a part. Anyone who has experience in battle knows how crucial it is – one of the most successful commanders of World War II, General George S. Patton, even nicknamed his US 3rd Army ‘Lucky’.

Combat is all about creating luck and getting on top of chaos. As we say in the British Army, no plan survives contact with the enemy. That is because, unlike any other human activity, while you try to achieve your task, the enemy is trying to kill you. I have never known any military operation to unfold without foul-ups – often many of them. To understand that you only have to look at the extraordinarily successful 1980 SAS operation to rescue hostages at the Iranian Embassy in London, which was fraught with unexpected crises.

One such crisis occurred at Entebbe when a Ugandan soldier challenged the raiding force as they approached their target. A seasoned commander, Netanyahu knew immediately what he had to do – eliminate him. Yet to David, this was a ‘key error’. The reason? The Ugandan’s actions were a ‘routine challenge’ and he would not have opened fire. This is absurd. The variables were so great and the stakes so high that no commander would take that risk – even if it meant losing surprise.

David says Netanyahu’s actions were ‘the key factor in nearly causing Operation Entebbe to fail completely’. But Operation Entebbe did not fail. It was the greatest special forces raid since World War II. Flying into hostile territory 2,200 miles from home, the IDF rescued 102 hostages in the face of fire from Arab and German terrorists and Ugandan President Idi Amin’s soldiers. Nothing like it has succeeded so spectacularly before or since. Even today it is studied by special forces around the world and it has profoundly influenced counter-terrorist policies of all Western nations.

Why did Entebbe succeed? Many Israelis, military and civilian, played vital roles. Contrary to David’s academic findings, the most important was Netanyahu. David criticises Netanyahu for exposing himself to enemy fire that killed him. In Britain, we get the same from armchair critics of Lt Col H. Jones in the Falklands, who, like Netanyahu, was killed taking risks that few could contemplate while leading his men to victory.

Above all, to suggest that Netanyahu’s death during the operation meant his impact was negligible is to misunderstand the nature of combat leadership. The influence of the most effective and inspirational commander, as Netanyahu undoubtedly was, does not end even when he is no longer among his men.

Netanyahu was a man that no soldier would fail. Dozens of his Sayeret Matkal comrades, breaking their usually inviolate silence on operational matters, have rallied to his defence, outraged that his reputation has been smeared. This is familiar territory in the British Army as in the IDF, where the loyalty of the best commanders is repaid by the loyalty of their men. It was their commander’s plan, and their determination to make it succeed was redoubled when he was killed – not to avenge him, but to ensure that his death was not in vain. And because, like Netanyahu, they were the bravest and the best.

David and José Padilha, the director of 7 Days in Entebbe, have both jumped on an overloaded bandwagon, hinting that Israeli prime minister Benjamin Netanyahu exploited the death of his older brother to achieve political success. Such cynical innuendo, as well as being an unfounded revision of history, gratuitously dishonours two of Israel’s most towering figures.