In a previous book, Six Weeks: The Short and Gallant Life of the British Officer in the First World War, John Lewis-Stempel took on the myth of “lions led by donkeys” by detailing the incomparable leadership of the British Army’s junior officers. Now, in The War Behind the Wire, he takes on the distorted consensus that unwilling Tommies were dragged into an unnecessary fight by unscrupulous politicians and incompetent generals. 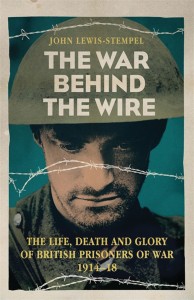 Unlike other armies, there was never a great collapse of morale and going over to the enemy. In virtually all cases, the capitulation of British troops was forced by overwhelming opposition, encirclement, lack of ammunition, chaos or confusion. Thirty per cent of men
were captured wounded.

British soldiers attempting to surrender were more likely to be killed than their French and Belgian allies. The Germans had a particular hatred for the British whom they blamed, above all, for stopping them in their tracks as they rampaged westward. Major Koebke of
the Kaiser’s Imperial Artillery wrote in November 1914: “The anger at the British was enormous. Very few prisoners were taken . . . and where there was the occasional one, he had nothing to smile about during his trip to the rear.”

Incarcerated into a tyrannous regime, PoWs were beaten, starved, humiliated, tortured, worked into the ground or simply killed. Bullet and bayonet were the Germans’ preferred methods of dispatching prisoners; though some deaths were more sadistically inflicted —
one German killed a wounded lance corporal by pouring paraffin down his throat. But many thousands died through exposure, disease, exhaustion, starvation and neglect. Many were driven out of their minds in captivity and every big prison camp had an asylum.
Medical treatment was often woeful and sometimes punitive; one wounded Canadian soldier was left with one leg shorter than the other in an operation that had been deliberately calculated to cripple him.

In the face of such horrors, PoWs could have adopted a passive compliance that would have earned them an easier life. But according to one private: “We were fighting a war against the Germans in their own territory.” Whether professionals, volunteers or conscripts, few British prisoners failed to take up some form of resistance against their captors, “to buck the Germans in any way we could” as another soldier put it.

It could take the form of “Hun-baiting”. A train full of newly captured prisoners, whose own morale should have been at its lowest, pulled into a station in Germany. A peakcapped German general strutted across to have a look and was mocked by a cry down the
train of: “All tickets please!” Less happily, on another station platform, Lewis-Stempel recounts that injured prisoners were stoned by civilians as they lay on their stretchers. It was common for PoWs to be cursed, spat at or worse whenever they came into contact with
German civilians or soldiers. But sometimes they also met kindness, sympathy — and even humour. One German soldier surprised a passing column of British prisoners by shouting “Up the Spurs!” in perfect English.

Those prisoners who were forced into slave labour — the majority of other ranks — carried out sabotage on an industrial scale, wrecking the engines and axles of vehicles they were working on, burying tools, derailing goods wagons, ruining crops, feigning sickness and striking. Others vandalised their camps and burnt down German facilities. They did this throughout the war, despite the resulting solitary confinement, beating, torture, penal servitude or death.

PoWs likened escaping to going over the top in battle, and suffered similar attacks of nerves before the big moment, knowing that there was every chance they might not survive. The fearless Second Lieutenant Harold Medlicott of the Royal Flying Corps was the war’s star escaper, with 14 attempts to his name; he was regarded as the wirecutter par excellence. Aged 23, he was killed — quite likely executed — following his final breakout in May 1918. British and Empire troops attempted more than 10,000 escapes, and 573
officers and other ranks made it home, including Canadian Private Harry Drope, an insurance agent, who walked 500 miles to freedom in Russia. Most had no choice other than to escape on foot. Among the few who took the train, two officers broke their journey for a spot of sightseeing in Berlin, and another, Major Crofton Bury Vandeleur, who stole an enemy uniform and spoke fluent German, shared his Cuban cigars with a German officer as he became the first officer to make a home run to Britain.

British PoWs knew that escapes, whether or not successful, tied up enemy troops and resources that otherwise would be used against their countrymen in the trenches. Many were desperate to get back to the front line. Lieutenant Will Harvey, the unofficial  PoWs’ laureate and serial escaper, insisted that although a prisoner might have endured hard fighting before capture and may be considered to have done his bit, “the ‘bit’ is not enough. The ‘bit’ is never done. England is still fighting.”

The official figures list 11,147 British prisoners dying in captivity but thousands more, reported missing in action, were worked to death as slave labourers, unregistered by the Germans. From October 1917 to September 1918, the death rate for British other ranks in the trenches was 4 per cent. Among British prisoners, excluding those who died from their wounds, it was 5.2 per cent. Sergeant Parsons of the Rifle Brigade said: “If I got another chance to go to the front I would willingly, but I should never be taken prisoner again”.

Lewis-Stempel describes our prisoners as the lost men of the Great War. He asks: “Who today knows anything of what befell Britain’s prisoners of war in those four years? There are no tears for their suffering, no quickenings of the heart at their valour”. In writing this
moving, harrowing account he has done them a noble service.