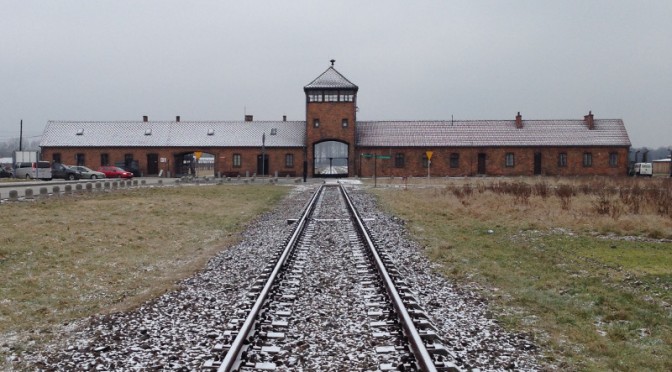 The Yellow Star is the account by S B Unsdorfer of his experiences in Auschwitz and Buchenwald, originally published in 1961. Richard Kemp wrote this foreword to the recently re-published book at the request of the author’s son, Zalmi Unsdorfer.

I am writing these words in a dark and malignant wooden hut at Auschwitz-Birkenau, seated on what the author of this book describes as “a hollow brick ledge running down the centre of the block from one end to the other”. A ledge like the one upon which Doctor Josef Mengele stood unmoved amidst scenes of heartless brutality, blood, screaming and despair as he made his ruthless selection on the day Simche Unsdorfer and his family were brought into this place.

Simche Unsdorfer, pale, skinny and with glasses that seemed bigger than his face, was 19 years old when he was transported by cattle car to this vast death camp. He has been an inspiration to me for forty years and during many military campaigns since the day I first opened his heart-rending account of extraordinary courage in the face of unexampled savagery.

Released from enslavement at Buchenwald as the war in Europe drew to its close, Simche lamented: “We had not the heroic glamour of soldiers who had died on the battlefield, or sailors drowned in the ocean; we were prisoners who had been humiliated and scorned”. 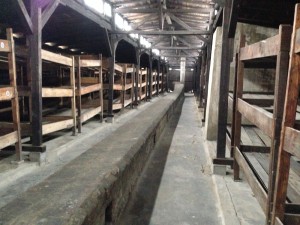 Thrust into the relentless meat-grinder of the Final Solution along with 70,000 of his Slovakian countrymen, Simche had not the opportunity to join the million and a half of his fellow Jews who took up arms on the Allied side during the Second World War. Although denied “the heroic glamour of soldiers” his personal courage was no less inspiring than theirs.

As with their other captives, from the moment of Simche’s arrival in Auschwitz the Nazis used every baleful and cowardly means at their disposal to terrorise him, to degrade him, to brutalise him, to strip him of his humanity, to grind him down, to break his spirit and ultimately to destroy him.

Yet, viciously torn from his family, hounded from camp to camp, bullied, kicked, beaten, threatened, abused, starved, frozen and exhausted, this physically far from robust teenager did not succumb to the depredations of what he rightly called “history’s greatest savages”. To the last he retained his human decency, his moral resolve and his unwavering religious faith. To achieve that in the face of such a sustained and brutal onslaught was without question an act of noble defiance. To survive against such tremendous odds was nothing short of victory. 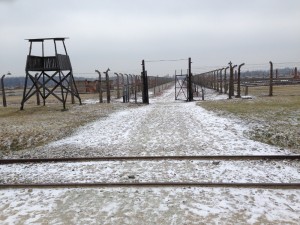 Simche’s victory demanded of him the most colossal courage. It was not that he was unafraid. How could he be? His undiluted fear pervades every page of this book. Not least in the chilling description of his shock on emerging from the dehumanizing halls of the “House of Transformation” as a shaved, bludgeoned and blue-striped extermination camp inmate: “Then the door was thrown open and, to my horror, I discovered that night had fallen over the Death Cage of Auschwitz”.

Courage is not an absence of fear. It is the strength of will and the moral resolve to overcome that fear. As Simche said of another prisoner who had risked his life to smuggle a pair of sacred tefillin into the death camp: “The Nazis could kill men but they could not kill courage”.

They did not kill Simche’s courage. It was courage that allowed him to elude almost certain death in Auschwitz by attaching himself to a work party in disobedience to the orders of his SS guards. A feat of defiance that risked immediate merciless beating and summary execution.

It was courage that led him to light a Hanukkah lamp beneath his bunk to warm his soul and the souls of his spiritually starved and physically distressed fellow prisoners, to inspire them with hope and with faith. A perilous act that “set our hearts ablaze”.

And skeletal, exhausted, starving, soaked to the bone, clubbed by rifle butts, it was courage that gave him the strength to drag a friend who could no longer walk for mile after mile along the quagmire of a ten-day death march towards Buchenwald.

Where did this ordinary nineteen-year-old find his extraordinary courage?

In that great religion of Abraham to which he clung unstintingly during every moment of his terrifying ordeal: “Where would we have gained the courage and strength to survive all our experiences of bestial cruelty, were it not for our great and historic past?”

When a fellow prisoner, a doctor and pre-war city councillor from his home town, demanded of him: “How can God allow all of this?” the boy responded: “You must keep your trust in God! You will never regret it.” He tried to inject some hope into the dejected man, but: “I realized that he had neither the physical strength nor the spiritual convictions to survive a hell like Auschwitz. Without these qualities there was little hope of survival”.

Simche drew strength too from the solace and fellowship of his tormented and distressed yet faithful friends from home who encouraged and guided him during his nightmare of captivity.

But the influence of his revered father, his constant inspiration, was strongest by far. His father, who could have saved himself from the gas chamber, but chose instead to die hand in hand with his frightened, shaking and frail wife. “How can I leave Mummy here alone?” were the last words spoken by the much-loved Rabbi of Pressburg to his son. This was not Jeremiah’s gentle lamb to the slaughter. It was the Supreme Sacrifice.

In homage to these good and brave people, whose tragic end was the fate of so many millions of Jews, it has been my privilege to place a rock beside the burial pit into which the Nazis dumped their ashes.

Released in 1945 by the American army from the horrors of Buchenwald, Simche reflected: “What would happen to our Jewish nation, to our religion and heritage, after this great and tragic disaster? The face of every Jewish inmate in the camp mirrored a vivid picture of the Jewish people, a race that had suffered the most tremendous spiritual, as well as physical onslaught, in the history of mankind”. 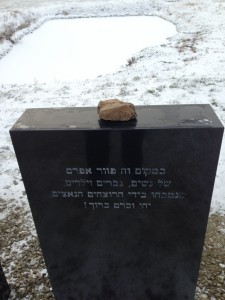 Three years later the fragmented Jewish nation was endowed with a miracle: the creation of the State of Israel, the hope of two thousand years. To this day that great country mirrors the courage and moral strength of Simche Unsdorfer; the valiant and selfless blood sacrifice of his father; and the victories of countless other Jewish men, women and children who resisted the terrors of the Nazi Genocide.

But unlike those defenceless people the State of Israel carries the Shield of David and the Sword of Gideon. Seventy years after Simche Unsdorfer arrived here at Auschwitz I had the honour to march alongside a contingent of Israeli soldiers defiantly bearing their national flag through this monument to horror and despair. That flag and the soldiers that guard it represent a sacred covenant that proclaims never again will the Jewish people suffer the fate of Simche Unsdorfer, his family, his friends and the millions who were victims of the Holocaust.

The flag of Israel, that glorious symbol of hope and of valour, must and will forever be kept flying, whatever the cost may be.

Photographs taken at Auschwitz in January 2014 by Richard Kemp