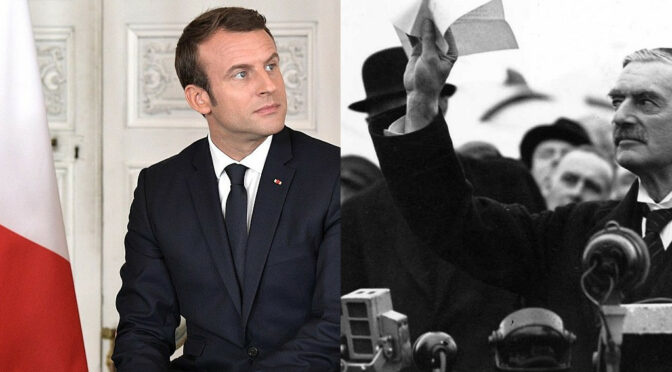 As Russian forces continued to build along the Ukrainian border last month, Netflix released one of its most popular movies to date – Munich: The Edge of War. The film is set in 1938 as German troops prepare to attack the Sudetenland while Chamberlain and other European leaders negotiate away Czechoslovakia’s sovereignty. Today, it’s almost as if President Macron is reading from Chamberlain’s script. Since his meeting last week with Putin, he’s been pressing Ukraine to implement the Minsk accords, brokered by France and Germany in 2015 as Russian forces and their proxies fought in eastern Ukraine.

The imposition of the Minsk accords would see an end to Kyiv’s sovereignty. They would give Russia a say in running the country and its foreign policy and hand seats in parliament to Moscow’s proxies. A few days ago Putin made clear exactly what he wants, telling Ukraine, with undertones of rape: ‘Like it or not, you’ll have to tolerate it, my beauty.’

It is extraordinary that Macron, whose country now holds the EU Council presidency, should entertain such gunpoint bartering of a democratic nation’s integrity. He has a track record of failed conciliations with Russia and has recently suggested there is ‘legitimacy’ in the Kremlin’s concerns over a putative threat from Nato. It must be obvious to him that Putin will not be mollified by such appeasement and that even if President Zelenskiy were to accede to Minsk it would not end there. But Macron has elections in April and perhaps believes that a Chamberlain style proclamation of peace for our time might secure victory for him.

Germany too has looked happy to go along with this ‘grand bargain’. That is no surprise from a government that has blocked another Nato member from supplying defensive arms to Kyiv and is desperate to placate Putin, having allowed an increasing dependence on Russian energy supplies. The Nordstream 2 gas pipeline is designed to bypass Ukraine, removing the only bargaining chip against Russia in Kyiv’s hands. While some have proposed the pipeline’s termination if Russia invades, Chancellor Scholz has been reluctant to express such a warning, falling back on the unsustainable excuse that it is a ‘privately managed commercial project’.

Germany has also poured cold water on the idea of cutting Russia out of the Swift banking system, which would be a powerful deterrent, threatening to hit its economy hard.

As the going gets tough in the East, where have the three EU presidents been? Usually eager to grandstand in the face of global events, they have been remarkably quiet since Putin mobilised in November. Josep Borrell, the High Representative for Foreign Affairs and Security Policy, has spoken of European unity over this crisis as well as ‘serious consequences’ and ‘massive costs’ in the event of Russian aggression. Does he think we haven’t noticed Brussels’s failure to respond to years of Russian-sponsored violence against Ukraine?

The EU, a recipient of the 2012 Nobel Prize for maintaining peace in Europe, seeks eastward expansion and loves the trappings of a superpower yet has no appetite for self defence or even to present realistic options to deter or punish aggression on its doorstep. The idea of ‘strategic autonomy’ and the longed-for EU army are laughable. But there is no laughter among member states in eastern or northern Europe. Macron’s proposal of an as yet unspecified new European security architecture independent of the US, his need for a diplomatic process distinct from Washington’s and his open contempt for ‘brain dead’ Nato alarms them.

For eastern European states know that ultimately, America alone guarantees their security while the EU compromises it – and that America’s readiness to underwrite defence in Europe will be worn down by continued unwillingness of Europeans to confront their own enemies.

This time of appeasement, silence, impotence and disunity in the face of one of the largest aggressive troop concentrations in Europe since the Second World War is perhaps the EU’s darkest hour. Putin may or may not invade in the coming weeks or months, but one thing is for sure: he will not be deterred from doing so by Brussels. Even Borrell admits that for Russia, the EU ‘doesn’t exist or is not relevant’.

Borrell and his fellow EU elites may think that if war comes to Ukraine, they will be protected. But the war would come to them as well, bringing the greatest crisis they have yet faced, with estimates of up to five million refugees fleeing westwards from Ukraine.