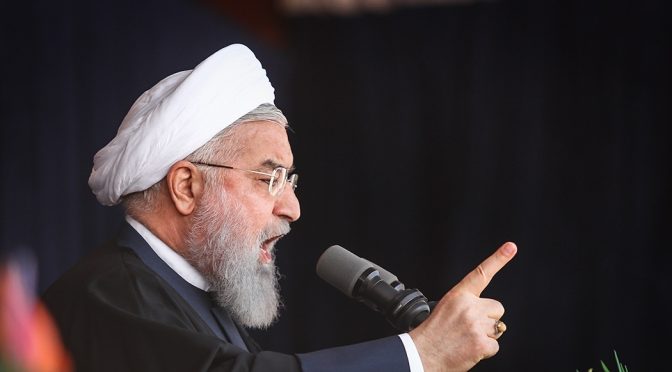 Article published in The Daily Telegraph, 8 May 2019.  © Richard Kemp

President Rouhani of Iran has issued an ultimatum to European governments: break US sanctions against Iran’s oil and banking sectors within 60 days or we will break our nuclear agreement. Counterintuitively, Rouhani’s demands could help Berlin, Paris, London and Brussels out of the dangerous conundrum they are in over the Iranian nuclear deal.

This deal, the Joint Comprehensive Plan of Action (JCPOA) between Iran and the P5+1, is certain to fail. Its declared purpose is to prevent Iran from becoming a nuclear armed state. In fact, it paves the way for the ayatollahs to lawfully implement their nuclear weapons programme in around 10 years’ time.

Despite continuing claims to the contrary the JCPOA failed to put in place a proper verification process and the International Automatic Energy Authority (IAEA) has not been able to certify Iranian compliance with the deal in any one of the three years since it was struck.

The nuclear archive seized from Iran by Israeli intelligence last year confirmed Iran had consistently lied to the IAEA about its programme and strongly indicated the likelihood of continued covert nuclear weapons development.

The deal failed to prevent Iran’s pursuit of nuclear-capable ballistic missiles and since 2016 it has conducted missile tests in contravention of UN Security Council Resolution 2231.

Instead of restraining Iran, the JCPOA emboldened the ayatollahs and led to increased aggression across the region. Tehran has continued to fuel the war in Yemen, causing untold suffering. It has supported Assad’s murderous regime in Syria, helping enable its survival.

It has increased its malign control over Iraq and Lebanon. It has been building a base of operations in Syria from which to attack Israel and continues to support its terror proxies in Gaza, ordering the barrage of over 700 missiles fired last week into Israel.

The ayatollahs have also maintained their campaign of terrorism outside the region, including a planned bomb attack in Paris last year. All of this enabled by billions of dollars in unfrozen assets released under the JCPOA.

Why was such a pernicious deal done? President Obama wrongly believed rapprochement with Iran would bring a new stability to the Middle East. He had guaranteed to prevent Iran achieving nuclear capability and lacked the strength to find another way. And desperate to secure his legacy, he decided a bad deal was better than no deal.

Despite reservations, Germany, France, Britain and the EU went along with it, buying into the Obama delusion and eyeing trade benefits for themselves. When President Trump pulled out, the Europeans had a major problem. Notwithstanding growing awareness of its shortcomings in most capitals, they couldn’t bear to be seen to do a volte face, following their nemesis Donald Trump.

Britain too? Not really. With a unique closeness to US policy makers and intelligence services, our leaders knew better. But the UK has long tried to harmonise its foreign policy with the main EU countries. With Brexit negotiations and our determination to avoid disagreement in Europe, this has become a dangerous weakness.

Hence London joined in denouncing Trump’s actions, maintaining the fiction that the deal was advancing peace despite all the evidence. They even helped create a new payments system for European companies to circumvent US sanctions.

How should the Europeans react to Rouhani’s ultimatum? By immediately reimposing their own sanctions against Tehran. They should not wait until his 60-day deadline expires, in case he lets it pass as with other deadlines. This would save face: it would not be in response to Trump’s demands but Rouhani’s. We can expect Tehran’s angry reaction. But it could possibly see the start of a long, hard road to achieving a new deal — one that actually achieves its objectives. The US currently remains open to that possibility.

More likely the ayatollahs would refuse any further deal-making. In any case no deal with the current Iranian regime is worth the paper it’s written on. They see nuclear weapons as their divine right and will never willingly give it up. In reality there are only two ways to prevent a nuclear Iran.

The first is to force them to cease or at least curtail their nuclear project through economic hardship and risk of regime overthrow. A renewal of comprehensive international sanctions could achieve that. It brought them to the negotiating table in the first place and renewed US sanctions led to Rouhani’s ultimatum. Economic suffering caused, in recent months, the widest-ranging protests against the regime since the Islamic Revolution in 1979.

The second is military action. Of course that is not a path anyone in their right mind would want to follow. But the stakes could not be higher. A nuclear-armed Iran with an intercontinental ballistic missile programme would threaten not just the region but Europe and the US. It would also give impetus to a regional nuclear arms race that is already under starters orders involving Saudi Arabia, Egypt and Turkey. And once Tehran gained nuclear weapons military action would no longer be on the cards.