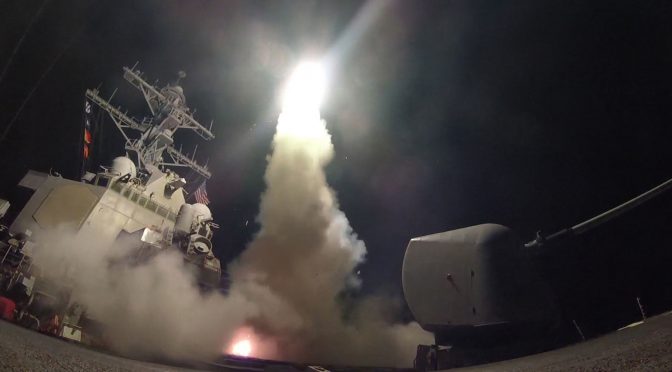 A version of this article was published in The Sunday Post on 9th April 2017. © Richard Kemp

President Trump’s attack on the Al Shayrat airbase in Syria has made the world a safer place. It was a return to US global leadership and resolve that hasn’t been seen for eight years.

Thursday night’s Tomahawk cruise missile strike was made necessary by President Obama’s weakness, appeasement and poor judgement that destabilized the Middle East and signalled a free pass to despots everywhere. Russia received the green light for intervention in Syria and aggression in Ukraine.

President Assad previously used Sarin in August 2013 in an attack at Ghouta. Despite Obama’s declaration the previous year that use of chemical weapons by Assad was a red line he failed to respond, with far-reaching consequences for American credibility and authority. Instead, with Russia and Syria, he agreed the surrender and destruction of Assad’s chemical weapons under international supervision.

Ever since, Obama, his Secretary of State John Kerry and National Security Adviser Susan Rice have been bragging about how they ended Syria’s use of chemical weapons by diplomacy rather than force.

Tuesday’s Sarin attack on the town of Khan Sheikhun conclusively exposed their miscalculation and naivety.

The Chemical Weapons Convention bans production, stockpiling and use of these munitions worldwide. Whenever anyone attacks with chemical weapons without consequences their subsequent use becomes more likely and threatens us all. Because of that, not only was Trump’s counter-attack legitimate, lawful and proportionate — it was vital for global security.

Why did Assad attack with nerve agent? Support from Russia, Iran and Lebanese Hizballah prevented the total collapse of his regime but the war against his own people is far from won.

Chemical weapons are not necessarily more effective than conventional munitions in terms of carnage and destruction. But just as the images of suffering, slow death and twitching agony cause revulsion around the world, they lead to blind panic and unparalleled fear among the population in potential target zones.

Assad’s intention was not only to kill but also to violently deter Syrian rebels from continuing the fight against him.

He had grown used to Obama-era timidity and inaction. From Trump he expected hot air and angry tweets but not an airbase leveled by a storm of cruise missiles.

It is unlikely he will repeat his mistake. He knows that if he does the fist will punch harder next time. Trump’s ambassador to the UN, Nikki Haley, has made it clear that while the US does not want to attack again, it is ready to do so.

Putin’s response has been to rattle his sabre. He promised to bolster Syria’s air defences and to end co-ordination with the US of air operations over the country. Predictably he sent a frigate to the Mediterranean at flank speed.

But he had been quick to distance himself from Assad immediately after the Khan Sheikhun attack and did not use his air defence systems deployed in Syria against the incoming missiles.

Putin will continue his habitual diplomatic antagonism against the West, but he will also reconsider whatever belligerence he may have in mind for eastern Europe. And he will not be contemplating military confrontation with the US.

Trump’s message was not just to Assad and Putin. It was also a warning to Iran, China and North Korea. Those Tomahawks will have reset their calculations on just how far they can now push the US.

America’s regional allies, especially Saudi Arabia, Egypt, the UAE, Qatar, Jordan and Turkey have also received a signal. They became increasingly fearful as Obama demonstrated he was no longer willing to stand by them but instead was backing their enemy Iran. America’s newfound resolution has left them reassured and greatly relieved.

But the week’s events in Syria have cast the spotlight on another, even greater concern. The reason President Obama failed to respond to Assad’s Ghouta attack in 2013 was that he was terrified military action would anger Iran and jeopardise the nuclear deal he was obsessively pursuing. Complications with Congress and support from the UK were merely incidental to that.

Despite Obama’s certainty that his arrangement over Syrian chemical weapons would be honoured Assad inevitably reneged — as became horrifically clear on Tuesday. His despotic Iranian puppetmasters are just as certain to cheat on the nuclear agreement. President Trump must now deal with that before it’s too late.