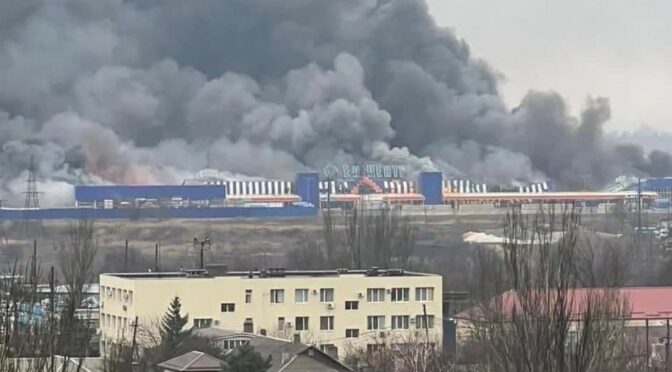 A version of this article was published in The Daily Express, 7 March 2022. © Richard Kemp

On Saturday a humanitarian corridor was arranged to allow civilians in the southern port of Mariupol to escape the fighting. The exodus was abandoned as Russian forces continued to shell the city. A further effort, also disrupted by Russian breaches of the ceasefire, began yesterday morning. This amounts to a test of Russia’s resolve to allow civilians out of other besieged cities before intensive attacks are launched against them.

Meanwhile Russia’s offensive grinds inexorably on, with a land corridor pretty much established between Crimea and Donetsk, one of Putin’s key objectives for this war. Much of the coastline along the Sea of Azov and the Black Sea is now under Moscow’s control. Russian forces continue to push west towards Odessa which, when taken, will effectively deny Ukraine all its sea ports. On Friday it was made known that Ukraine’s naval flagship, the Hetman Sahaidachny, was scuttled early in the war rather than allowing it to fall into enemy hands. The tragic fate of this ship stands as an epitaph for Britain’s agreement signed last year to rebuild Ukraine’s navy, including construction of new bases on the Sea of Asov and Black Sea.

In the north, Russia continues its onslaught against Kharkov and is progressively encircling Kiev with forces advancing on the city from the east, north east and north west. As well as direct Russia-Ukraine talks, planned to resume today, there have been further attempts to mediate by Israel and France. Unless these efforts lead to some kind of diplomatic breakthrough — likely to mean President Zelenskiy’s capitulation — it is hard to see how the Russian army does not eventually overcome Ukraine’s staunch resistance.

Without revealing their own casualty figures, Ukraine claims to have killed 11,000 Russian soldiers. Russia says only 500 of their own troops have died. Neither can be believed. Ukraine’s numbers are intended to boost morale, supporting the widespread talk of Russian military incompetence in this campaign. The immense difficulties for even the best led, trained and equipped army advancing long distances in harsh terrain against a determined enemy should not be underestimated and this helps explain Russia’s perceived slow progress in the north.

Nevertheless there are indications that Moscow’s best troops are not fighting in Ukraine but remain on standby in Russia. US intelligence estimates that Putin has so far only committed 75 of the hundreds of aircraft readied for the invasion and some reports suggest risk averse use of the planes that are fighting. Why? It must be assumed that Putin is preserving the cream of his land and air forces for a phase 2 — somewhere beyond Ukraine.

Other than Putin’s downfall, the one thing that could deter such planned future aggression is direct NATO engagement in this war, which would of course carry enormous risks of escalation and might further rally the Russian people around Putin and his regime. That was excluded on Friday when NATO foreign ministers, further cowed by Putin’s nuclear threats last week, rejected Zelenskiy’s call for a no-fly zone over Ukraine.