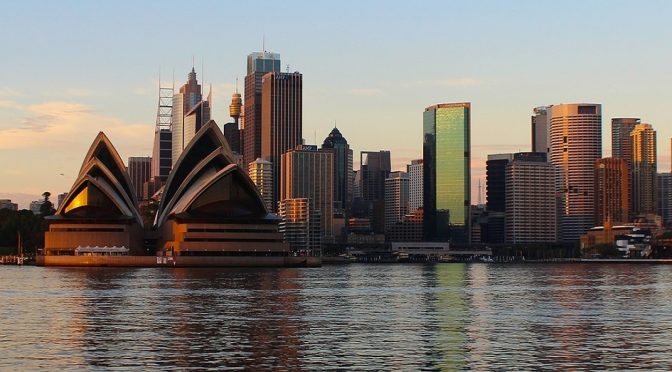 He died in 1900, but my great grandfather, Archibald Richardson, outback explorer and early Rockhampton pioneer, is even today spoken of with respect in central Queensland. To me though he is a grave disappointment. I’ve been bragging about being descended from a criminal transported to the Australian colonies. But I learn from the Rockhampton Historical Society that Richardson made the journey of his own volition, destroying any street cred I had down under.

Shortly after I arrive in Sydney news breaks that Israeli intelligence foiled an Islamic terror plot to blow up a passenger plane flying out of here last year. I know of many other times Israeli intelligence has saved the lives of Australians – as well as Brits, Americans and Europeans – in our cities and on the battlefields of Iraq, Afghanistan and Syria. The Israelis are not alone in their impressive track record against jihadists. The ‘Five Eyes’ intelligence system enables seamless cooperation between Australian, New Zealand, British, US and Canadian services. Asio and Asis, like their MI5 and MI6 counterparts in the UK, have prevented many more terrorist plots than have succeeded.

Europe could learn a thing or two from Australia about putting a stop to the mass illegal immigration that jihadist groups use as a cover to infiltrate terrorists into our countries. But Australia’s successful strategy is too politically incorrect for the lilylivered European politicians who prefer to appease would-be attackers and their sympathisers. One of the main architects of that strategy is General Jim Molan, the distinguished soldier who was also chief of operations for the coalition in Iraq. I catch up with him in Canberra the week he takes his seat in the Senate. In the visitors’ gallery he is briefing me on the proceedings below when silence unexpectedly descends. Waving towards the gallery one of the senators calls up: ‘Hey Jim, can you come down here mate, we need you on the floor!’ You will find no such cheerful informality in the buttoned-down House of Lords. When Molan arrived in the Senate he was accused of war crimes in Iraq by his political opponents. Such calculated efforts to undermine our national defences are common in Britain too, where many soldiers have been hounded by hard left lawyers with false accusations of serious crimes in Iraq and Afghanistan. This smear against Molan insults all who have fought for Australia, whose service and sacrifice is commemorated in the sublime war memorial directly across from Parliament House. As Senator Molan hastens to his duties in the chamber I head over there to place poppies beside the names of two pupils of my old school, Colchester Royal Grammar, who fell fighting with the Anzacs in the Great War.

In Sydney I address the spirited students of another distinguished school, itself dedicated to Australia’s fighting men, Moriah War Memorial College. My attempt to dish out some imperious pommy stick is stingingly repulsed by a 15-year-old schoolboy who questions me on the outcome of the Ashes.

I call on former Prime Minister John Howard. He is more tactful about England’s recent cricketing debacle so I don’t have to raise his own bowling record in Pakistan. In the aftermath of 9/11 Howard was one of the most decisive supporters of the US-led war on terror, immediately invoking the Anzus treaty and committing Australian forces to Afghanistan and Iraq. A portrait on his wall of Winston Churchill, Britain’s greatest prime minister, prompts me to reflect on who was Australia’s greatest. There can be few stronger contenders than the man across the room.

In Brisbane I visit the office of another great leader, US General Douglas MacArthur, preserved as it was when he led the war against the Japanese. I notice another picture of a famous man: George Washington. I ask the attendant why Washington hangs here and not, as protocol dictated, the president of the day, Franklin D Roosevelt. He tells me MacArthur refused to allow the likeness of a Democrat in his office.

In Rockhampton, amidst Capricornian humidity, I enjoy a cold beer at the Criterion Hotel. MacArthur spent time here when it was the headquarters of his corps commander, General Robert Eichelberger. He sent Eichelberger to take control of the battle of Buna-Gona in New Guinea in 1942, telling him: ‘Bob, I want you to take Buna, or not come back alive’. New Guinea saw some of the toughest battles and most hellish conditions of the war. For many Australians, the Kokoda Track is the Second World War’s Gallipoli. The diggers there fought with the same awe-inspiring courage, endurance and determination as their fathers 27 years before.

The Kokoda campaign was the first time Australia had been directly threatened as a nation. The country is again under threat, this time from international jihad. We have seen it unfold bloodily in Bali as well as several shooting and stabbing attacks in Australia and many foiled plots including the Sydney aircraft bombing. It is a different kind of war but no less a threat to our way of life.