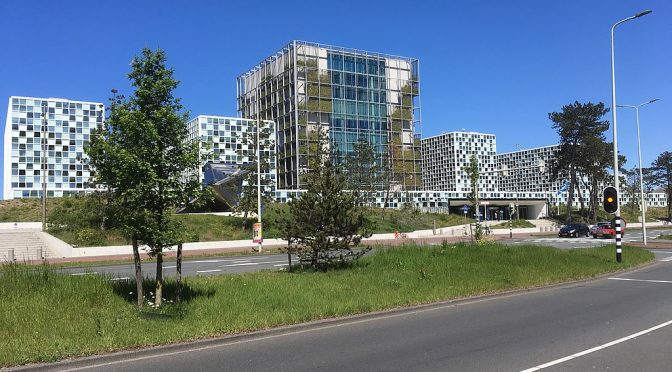 The International Criminal Court (ICC) waited until after US President Joe Biden took the oath of office before unilaterally handing itself territorial jurisdiction over Israel — more than a full year since the pre-trial chamber was asked to rule on the matter. Mindful of President Donald J. Trump’s sanctions against ICC staff, including revoking Chief Prosecutor Fatou Bensouda’s US entry visa, and his warnings against efforts to brand Israel and other allies as war criminals, court officials lacked the steel to make an announcement while he remained in the Oval Office.

The ICC has long had its sights on what it no doubt considers an unholy trinity: Israel, the US and Britain. Its reasons are twofold. First, these are the three Western democracies most active in using legitimate military force to defend their interests. This is anathema to the left-liberal doctrine of ICC officials and their soul-mates in such morally dissipated places as the UN Human Rights Council. Second, they wish to virtue signal, deflecting criticism that the court is biased against African states, which led to South Africa, Burundi and The Gambia threatening withdrawal in 2016. Yet by its charter, dealing with countries that lack the will or capability to bring their own to justice is the sole purpose of the ICC. This does apply to some states in Africa and elsewhere but demonstrably does not apply to Israel, the US or Britain, each of which have long-established and globally respected legal systems.

Bensouda failed to get her way with the US and UK. Despite having submitted more than 20,000 pages of documentation in support of her demand for a formal investigation into alleged crimes by US forces in Afghanistan over a 15-year period, the pre-trial chamber turned her down, in part due to a rightful US refusal to cooperate with a body that it considers likely to abuse its power. Having first closed a preliminary examination into allegations against UK forces in Iraq in 2006, Bensouda then re-opened her investigation in 2014 but was forced to shut it down again in 2020 with an admission that ‘none of the potential cases arising from the situation would be admissible before the ICC’.

So for the time being, Israel remains the prize, despite the dissenting opinion of Hungarian Judge Peter Kovacs, one of the three justices who determined the ICC’s jurisdiction:

‘I find neither the Majority’s approach nor its reasoning appropriate in answering the question before this Chamber, and in my view, they have no legal basis in the Rome Statute, and even less so, in public international law.’

Israel was always highest on Bensouda’s list, urged on by a Palestinian Authority intent on undermining the Jewish state through a dual strategy of brainwashing its own people to precipitate violence, and manipulating international entities such as the ICC to delegitimise lawful defensive efforts. Bensouda has also been encouraged by a vengeful UN Human Rights Council, which has for years made untold efforts to force Israelis into the dock, obsessing on this malevolent mission at the expense of genuine human rights abuses.

The ICC’s design against Israel is the latest in a long history of endeavours to subjugate and scourge unwilling Jewish people deemed incapable of regulating themselves. When you examine the unexampled contortions the court has gone through just to get to this point, you have no choice but to question whether antisemitism is the motive.

The effects of the ICC’s decision will be profound. This is only the end of the beginning. Unless halted, investigations into spurious allegations of war crimes will go on for years, perhaps decades, creating a global bonanza for all who hate Israel, including at the UN, the European Union, various governments and in universities and so-called human rights groups. Although determining jurisdiction does not imply guilt, it will be widely portrayed as just that and utilised to stir up hatred and violence against Israelis and Jews everywhere.

But the most detrimental effect of the ICC’s decision will be felt by Palestinian Arab people who, for decades, have been abused as political pawns by their leaders and who would be the greatest beneficiaries of any peace agreement with Israel. The ICC’s ruling makes such a deal even more remote today.

After years of counterproductive peace processing by the US, the EU and others, the Abraham Accords of 2020 for the first time brought an actual possibility — however slight — of peace between Israel and the Palestinian Arabs. Contrary to former US Secretary of State John Kerry’s categorical assurance in 2016 that ‘there will be no separate peace between Israel and the Arab world without the Palestinian process’ — his infamous four ‘no’s — that is exactly what happened last year.

It came as a severe blow to Palestinian leaders who have consistently rejected all efforts at peace, most recently by Presidents Obama and Trump. Instead of trying to arrive at an understanding with Israel, they have remained intent on squandering vast sums of overseas aid for their personal benefit and on their malign anti-Israel programme, while using the hapless peace processors to gain concession after concession from the Jewish state but themselves making none.

The Palestinian leadership have also counted heavily on backing from other countries in the Middle East. But the steady dissipation of support from Arab leaders, exasperated by their intransigence, became increasingly worrisome for the Palestinians. The fears of the Palestinian leaders exploded into a catastrophe — another ‘nakba’ — when the UAE, Bahrain and Morocco, backed by Saudi Arabia, signed up to the Abraham Accords. As the Abraham process powered on at the end of last year, some among the Palestinian leadership apparently realised the game might be up. Angry denunciation of their Arab neighbours seemed to dwindle into sullen resignation as they floundered around for an answer.

Now could have been the time when the likes of Palestinian Authority President Mahmoud Abbas concluded there may be no other course than to find some way of treating with the Israelis. It was impossible for him to conceal what was going on in the Middle East beyond the West Bank, with the growing realisation among his benighted people that it may after all be conceivable to work with, rather than against, Israel, as their brothers in Dubai were doing.

Here was an opportunity for creative diplomacy by the Biden administration. On the one hand encouraging further progress in the Abraham project while on the other restoring ties with the Palestinians after their refusal of any relationship with the hated Trump. A dexterous approach, rather than a return to the washed-out Kerry peace processing, could have taken advantage of the Palestinian leadership’s new nakba in the interests of peace and prosperity for their people.

Enter the ICC pre-trial chamber, throwing a lifeline to Abbas and his henchmen’s malevolence. Hussein al-Sheikh, PA civil affairs minister, declared the ruling ‘a victory for rights, justice, freedom and moral values in the world’. Although al-Sheikh’s description is the diametric opposite of reality, for the PA it is certainly a major diplomatic triumph. In any conflict, even a symbolic morale boost can turn the tide, reviving flagging spirits and restoring the will to fight on.

Thus the ill-judged insertion of the ICC into the conflict, especially in such legally untenable and contested circumstances, makes even more difficult the potential for genuine dialogue between Israel and the Palestinians, which is the only realistic path for bringing about peace between them. Effectively, the ICC’s determination to criminalize the longstanding political dispute can lead only to further polarisation as mutual recriminations are incentivised. In other words, it will exacerbate the conflict, not contribute to its resolution, at the very moment when resolution may have been closer than ever.

In an unprecedented move early last year, Germany, Austria, the Czech Republic, Hungary, Australia, Canada, Uganda and Brazil petitioned the ICC, of which all are members, arguing that a formal investigation could not be launched as the Palestinian Authority does not meet the definition of a state under the Rome Statute that established and governs the court. These countries, whose objections to the legitimacy of the legal process were overruled, should now vehemently protest the ICC’s decision on jurisdiction, also legally unjustifiable.

The ICC’s imperious judgement on its own authority over Israel is not only detrimental to peace, it also undermines the credibility of the court itself. Both are consequences so serious that responsible member states should consider at least temporarily defunding the ICC pending fundamental reform. As a non-member, the US should renew and reinforce its actions against court officials rather than the Biden administration’s likely inclination to end the sanctions.