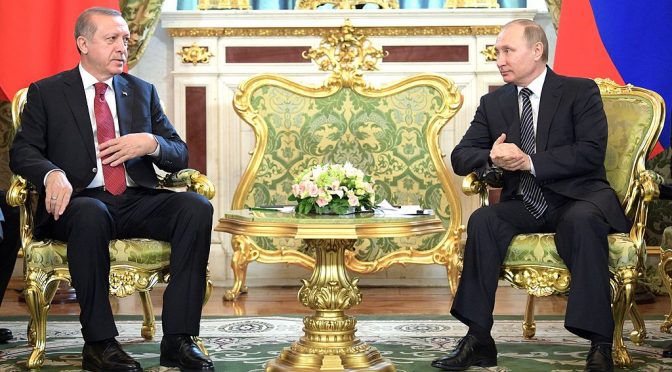 Yesterday, three days after Turkish president Recep Tayyip Erdogan savagely condemned President Emmanuel Macron’s brave stand against radical Islamism in the wake of the jihadist beheading of schoolteacher Samuel Paty in Paris, there were violent attacks in France and at the French consulate in Jeddah, Saudi Arabia. In Nice, a woman was beheaded and two others killed. In Jeddah a knifeman stabbed a guard outside the French consulate.

Erdogan, purportedly incensed by Macron’s intention to bring in legislation restraining the spread of radical Islamism in the wake of the schoolteacher’s murder, said the French president needed ‘mental treatment’ and called for the boycott of French consumer products. He likened France’s treatment of Muslims to the brutal repression of Jews in Germany before the Second World War.

Erdogan is a hard-line Islamist and he must have known the effect these words would have when uttered on the world stage. He may not have ordered the attacks in France but his incendiary bombast surely made them far more likely.

Erdogan’s AKP party is a reformatted version of the now banned National Salvation Party, which advanced a violent Islamist ideology. The AKP has a thin pro-Western and pro-democracy veneer, designed to camouflage an anti-democratic and de-secularising agenda.

This they have been fulfilling, locking up political opponents, undermining secular education, clamping down on public protests, seeking to harness the judiciary, controlling social media, marginalising the Western-influenced armed forces and throwing journalists into jail. In one of Erdogan’s most provocative acts, in July he issued a decree turning Istanbul’s Hagia Sophia, once the largest Christian church in the Middle East, into a mosque.

But Erdogan’s purpose exceeds the borders of Turkey. He has ambitions to become the champion of Sunni rights everywhere – with the vision of a restored caliphate under his leadership. This goes well beyond his repeated Islamist rhetoric and his fomenting of conflict across the region from Libya to Syria, Iraq and Nagorno-Karabakh, where he has reportedly deployed Syrian mercenaries to fight against Armenia.

He vocally supports the Muslim Brotherhood, proscribed as a terrorist entity by many countries in the Middle East and elsewhere. Earlier this month, he outrageously declared Jerusalem to be a Turkish city and fiercely opposed the historic Abraham peace accords between Israel, the United Arab Emirates, Bahrain and Sudan.

Erdogan has form on sponsoring terrorists. He has funded, encouraged and facilitated the proscribed group Hamas, hosting their leaders in Istanbul and allowing them to plot attacks against Israel on Turkish soil. Despite his strident self-promotion in fighting Isil, there have been indications of complicity and increasing evidence that Turkey is a permissive jurisdiction for Isil and other jihadist networks.

Standing on the frontier between Europe and the Middle East, Turkey is an important strategic ally for the West. But Erdogan is not, and appeasement will not curb his despotism. France, and Europe, cannot allow his aggression to continue unchecked.

The European Union and other Western powers should impose sanctions. Despite Erdogan’s defiant bluster, this could be a particularly effective tool at a time when the Turkish lira is plunging and now sits at an all-time low against the dollar.

Turkey’s membership of Nato should also be reviewed. Turkey is a significant player in the alliance, with nearly three quarters of a million men under arms. But in a challenge to Nato’s integrity, last year Erdogan acquired the Russian S-400 missile system.

Even consideration of Turkey’s status within Nato would represent a major blow to Erdogan’s prestige as his political support in Turkey is on the decline. We can’t let him get away with his misdeeds.