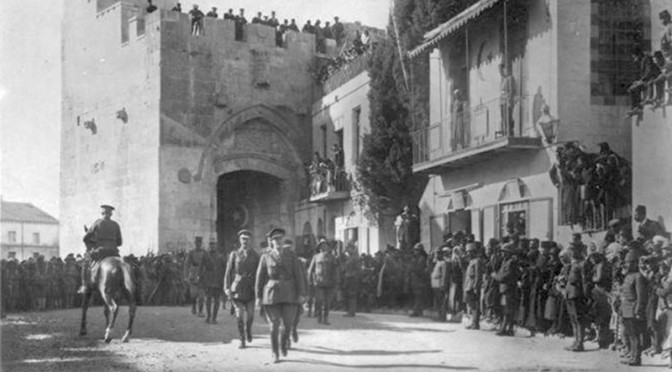 By Richard Kemp and Jasper Reid. Article published in The Jerusalem Post, 10 December 2015.

Ninety-eight years ago tomorrow (December 11) General Sir Edmund Allenby entered the Holy City after defeating the Ottoman forces in the Battle of Jerusalem. This was one of Britain’s great victories in the First World War and a much-needed uplift for our national spirit, reeling from the 300,000 casualties sustained in the Battle of Passchendaele in Belgium that ended the previous month.

This anniversary reminds us of the shared history and values of Britain and the State of Israel; and, with the perils we face in the world today, of the need for the closest friendship between our two countries.

According to Lieutenant General Sir George Macdonogh, director of British military intelligence during the Great War, Allenby’s conquest of Palestine in 1917 and 1918 was made possible by the Jewish intelligence network, Nili. Led by the distinguished botanist Aaron Aaronsohn and his sister Sarah, Nili took tremendous risks to pass vital information on the Turks to Allenby’s forces. Some, including Sarah, sacrificed their lives to help the British.

Within Allenby’s army was the Jewish Legion: the 38th, 39th and 40th Battalions of The Royal Fusiliers, which had been raised in the British Army to fight the Ottomans. Formed and led by British Christian officer Lieutenant Colonel John Patterson and Russian Zionist leader and soldier Ze’ev Jabotinsky, the Legion was made up of Jews from Britain, the US, Palestine, Russia, Canada, Argentina and the Ottoman Empire. They fought valiantly in battles to the north of Jerusalem and in the Jordan Valley.

The Jewish Legion was the first formed Jewish fighting force since the Maccabees, and Prime Minister Benjamin Netanyahu has called John Patterson the godfather of the IDF.

Another British officer who helped shape the future IDF was Major General Orde Wingate. As a young captain in Palestine in the 1930s, he taught Jewish communities to successfully fight off the marauding Arab gangs that were trying to brutalize and murder them and drive them from their land. He instilled in the Jewish defenders the need for violent aggression against the enemy, tempered by scrupulous respect for non-combatants, two attributes that distinguish the IDF to this day.

Had he survived the Second World War, David Ben-Gurion planned to make Wingate, a British Christian officer, the IDF’s first chief of staff.

Britain can be proud of these early examples of friendship and mutual cooperation. What followed, however, was a national disgrace.

Britain deliberately failed in the mandate it had accepted from the League of Nations to implement the 1917 Balfour declaration that called for a Jewish national homeland in Palestine. Motivated by a desire to appease and inveigle the Arabs, successive British governments saw to it that this homeland was not established under their rule.

Even after the persecution of the Jews had begun in earnest by the late 1930s in Nazi Germany, Britain continued its policy of appeasement of the Arabs by enforcing illegal restrictions on the immigration of Jews from Europe into Palestine. To our eternal shame, this policy sealed the fate of thousands of Jews who consequently perished in the Holocaust. Their blood is on our hands.

It was these actions, arising from Arab rejection of a Jewish presence in their own historic homeland, that drove that most honorable Jewish leader, Menachem Begin, to resort to attacks on British forces in Palestine during the late 1940s. Even in this desperate situation Begin’s Irgun maintained a level of restraint and proportionality in its actions not seen in a violent insurgency before or since.

After the war, Britain’s treatment of Jews trying desperately to get to Palestine having escaped the Nazi killing factories was nothing short of barbaric; motivated by anti-Semitism as well as continued appeasement of the Arabs. It included incarcerating the wretched survivors of Nazi extermination camps and even sending some back to Germany as a punishment for non-cooperation.

When the UN voted on the 1947 partition plan, granting a homeland to the Jews in Palestine, Britain abstained, signaling her continued animosity to the Jews and support for the Arab nations that intended to crush the fledgling Jewish state.

Despite Britain’s monstrous treatment of the Jews and their state in such recent memory, Israel has consistently maintained the spirit of Nili and the Jewish Legion and remained a true and steadfast friend of our country, especially in the fields of defence and intelligence.

For example only last month, the Mossad passed intelligence to the British government about an Islamist terrorist plot to down aircraft flying out of Sharm e-Sheikh in Egypt, which led to the cancellation of flights until security could be re-assessed. This is just one of the many occasions on which Israel has provided Britain with intelligence that saved the lives of our civilians and soldiers.

It is a two-way and wide-ranging relationship. Many British soldiers are alive today because of Israel’s willingness to share the unrivaled technology and techniques it has developed in its continuous fight against terrorism.

Both of our countries need this friendship today more than at any time in the past. The Nazis are long gone, but the world faces another, at least as dangerous, ideology of hatred. Radical Islam shares many of the attributes of Nazism, including ethnic supremacy, rampant anti-Semitism, intolerance and violent persecution of minorities, ambitions for global conquest, deliberate and unrestrained use of terrorist tactics, a fanatical and dangerous willingness to sacrifice themselves for their beliefs and contempt for diplomacy and peaceful dialogue.

If the Islamic State or al-Qaida ever gain a substantial power base they will commit genocide on a large scale, already previewed in the way they deal with Christians and other religious groups in territory they control.

In the face of this evil, European countries appear to have learned none of the lessons of the Third Reich.

Again they seek to appease those who would attack and subjugate us. Again they turn on the Jews, with the Jewish state always singled out for special discrimination.

Britain is also guilty. Despite some of the tightest military and intelligence relationships between any two countries, Britain’s political stance toward Israel, while frequently positive, is too often spineless, unprincipled and unjust. Like other European nations, and in line with our past policies, Britain continues to prioritize appeasement of Arabs and its own predominantly anti-Israel Muslim communities above support for the Jewish state. This is compounded by the influence of a dominant media often intensely biased against Israel.

For example, only this week the knife-wielding violence that has been plaguing Israel’s streets revisited London when an Islamist terrorist slashed at three passengers in an east London tube station, screaming: “This is for Syria.” The British media has shown none of the moral equivalence and understanding for this attacker that has been exhibited toward Palestinian knifemen hacking at Jews in Israel, yet ultimately the motivations are identical.

It is time for Britain to repudiate this weak and morally bankrupt behavior. We must not repeat our treachery against the Jews in the 1930s and ’40s. We must recognize that Israel’s values are Britain’s values, Israel’s fight is Britain’s fight and Israel’s peril is Britain’s peril. Above all we must remember the example of Nili and Allenby a century ago, and understand that success in this fight depends on unity and common cause with the Jewish state, not the division between us that our enemies strive for.