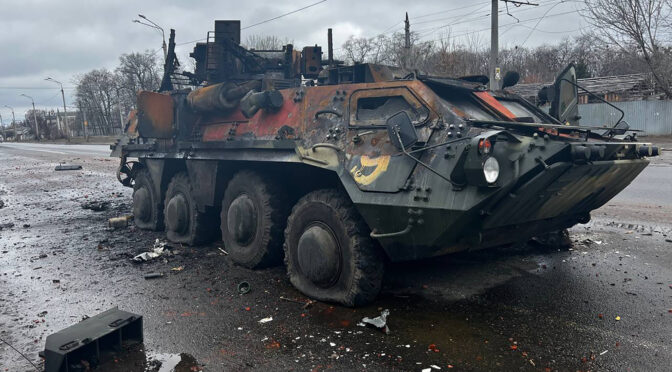 The Russian campaign in Ukraine may have reached its culminating point. In short, Russian forces may no longer be able to achieve their strategic objective by offensive operations. If so, it would mark a turning point.

It would not, however, mean the war is over, or that Ukraine has achieved victory. An effective stalemate might see the war entering an even more devastating phase, with Russian forces digging in and switching from wide-scale ground attack to besieging, bombarding and starving the major cities, while reinforcing and preparing for a renewed offensive.

Indications that Vladimir Putin may believe his campaign has culminated include a new defensive effort to interdict combat supplies and troops being pushed into the fight. In recent days we have seen attacks in the west against logistics bases, airfields and concentration centres for foreign volunteers. Cyber attacks – already widely used inside Ukraine – may now be extended to Nato countries to deter and disrupt supply of munitions and intelligence.

Putin may also plan to deploy chemical weapons to break the deadlock; President Biden warned of this yesterday. Assad’s use of chemical weapons in Syria, over which Putin presided, caused devastating physical and psychological effects that proved decisive.

Reaching a strategic culminating point does not mean Russia cannot continue local tactical manoeuvre. Russian air operations, surprisingly limited so far given their massive superiority, have been intensifying in recent days. Russia will continue to tie down Ukrainian forces, including by threatening amphibious assault against Odessa and feints towards Kyiv.

We will see continued efforts to seize Mariupol, a vital objective for Putin, completing his land corridor between annexed Crimea and the Russian border. Gaining Mariupol would be a major element of his claim of victory should the conflict end with some form of peace deal.

Entering a stage of consolidation and siege warfare is not without hazard for Russia, with Ukrainian hit and run attacks and local counter attacks against their logistic chains. Defending against such actions, which have already proved successful, will tie down large numbers of troops.

As sanctions continue to bite, sustaining even a stalemated campaign will be increasingly difficult for Russia. The West must continue to pressure China against stepping into the breach with finance and munitions. Despite Putin’s efforts at intimidation, including nuclear threats, it is essential that Nato escalates its financial and military support so that Ukrainian forces can inflict maximum damage against Russia to give Volodymyr Zelenskiy the greatest possible leverage in any negotiations and also to deter Putin from future aggression.

Paradoxically, Zelenskiy’s best course of action now might be to draw the Russian army beyond its culminating point, luring it into street fighting in the cities where defending forces can inflict disproportionate attrition against the attackers. Russia is adept at hammer-blow destruction using artillery and air strikes but incompetent in ground tactics, and such a move could be less damaging for Ukraine than suffering months of stand-off bombardment. For Russia, attacking beyond its culminating point risks over-extension, counter-attack and – ultimately – defeat.