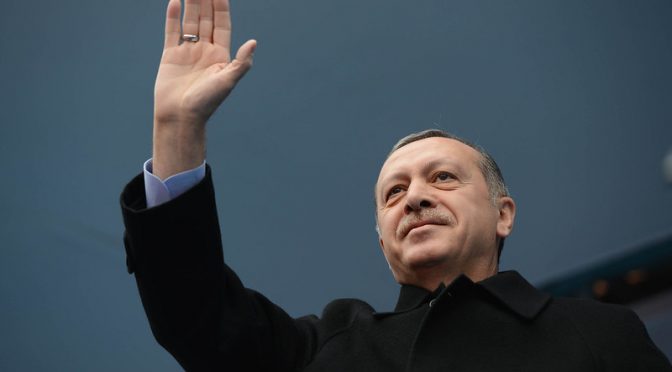 An investigation by this paper has made clear that Hamas terrorists have been planning attacks against Israel from Turkey. President Erdogan knows this but denies it. He even denies that Hamas is a terrorist organisation despite the group’s categorisation as such by the US and EU.

According to Erdogan, Hamas is ‘a resistance movement trying to protect its country under occupation’. This is a lie. In fact, Erdogan’s support for Hamas is itself an act of aggression against Israel. In 2015 Turkey agreed to prevent Hamas planning attacks from its territory but has never done so. This inaction harms Israel but is even more damaging to the Palestinian people. Rather than developing Gaza, which it has controlled since Israel left in 2005, Hamas has consistently used the Strip as a base to attack the Jewish state.

Millions of dollars of international aid have been diverted to stockpiling missiles and other weaponry, digging attack tunnels and funding strikes against Israel. Much has also been diverted into the personal bank accounts of Hamas leaders who have been branded the wealthiest terrorists in the world. Not only have Gazans been deprived of much-needed economic development, hospitals, schools, utilities and humanitarian supplies, they have also been blockaded by Israel to protect its own citizens from attack. This has in turn intensified the hardship and suffering faced by ordinary Palestinians.

By encouraging and facilitating Hamas, Erdogan has helped make this situation worse. But any concern he may have for the Palestinian people is heavily outweighed by his long-standing animosity towards the State of Israel.

Hamas does not wish to control Gaza and the West Bank only. Its charter demands the removal of the State of Israel and its replacement by an Islamic state. Hamas leaders re-affirmed this objective – to be achieved at gunpoint – on the recent 32nd anniversary of the movement’s founding. Osama al-Mazini, a senior Hamas official, called upon Jews to leave the land, threatening them with thousands of suicide bomb attacks. These are not empty words. All of Hamas’s energies have been devoted to attacking Israel and inciting global condemnation of its leaders and armed forces when they are forced to defend their people.

Recent years have seen a significant shift in the attitude of many Arab states towards Israel, with relations thawing and unprecedented connections forged. This is in part due to the common fear of Iran. It includes growing support among Arab leaders for the Israel-Palestine peace proposals yet to be publicly unveiled by the Trump administration. Hamas condemn any such moves towards normalisation. They have repeatedly made clear they have no interest in peace or any solution, two state or otherwise, that does not lead to the annihilation of the Jewish state.

This is on their own account and also on behalf of another major sponsor, the Islamic Republic of Iran. Iran’s relations with Hamas have been varied but they share the common goal of destroying Israel. As well as the value of Hamas as a constant thorn in Israel’s flesh and an effective propaganda tool, Iran intends for Gaza to be the southern prong of a pincer attack against Israel with the main thrust in the north from proxies in Lebanon and Syria. The attraction for Iran of striking Israel is increased as unrest continues at home.

Erdogan’s support for Hamas reduces the prospects for peace in the region and makes more likely a full-scale war involving Israel, Lebanon, Syria, Iran and Gaza, embroiling Russian forces in Syria and with inevitable spill-over into Egypt, Jordan, Iraq and Yemen. Given the vast array of Iranian-supplied rockets facing Israel, it is the population of southern Lebanon that will suffer most as the Israel Defence Forces are compelled to launch both heavy air strikes and large-scale ground incursions.

Erdogan will not trigger this conflict but his support for Hamas is a major aggravating factor. Jerusalem know this and despite immense restraint so far, might at some point have no choice but to take action against Hamas in Turkey. Israeli operations on the territory of a Nato member would have dire consequences.

Nato, the UN, the EU and the US therefore have an obligation to pressure Erdogan to kick Hamas out and cease all backing for them. The UK should be part of this effort. Its message of condemnation should include proscribing Hamas in its entirety. Currently only the so-called military wing is designated as a terrorist organisation. This is a false dichotomy, fabricated to allow continued dialogue with Hamas’s political leadership. But all elements of the group are interlinked and overlapping and all contribute to terrorist violence. Proscribing it in its entirety would greatly damage Hamas and send a clear signal to Erdogan.